I was going throught the text Introduction to Algorithm by Cormen et. al. where I came across the two alternative definitions of Universal Class of Hash Function.

The versions are as follows:

Now in the above definition the authors are using "for each pair of distinct keys $k,l\in U$" to mean that probably we do not leave out any possible key pair for which collision occurs.

Through-out the rest of the book the author uses the second definition. I felt like finding the equivalence of the two definitions. 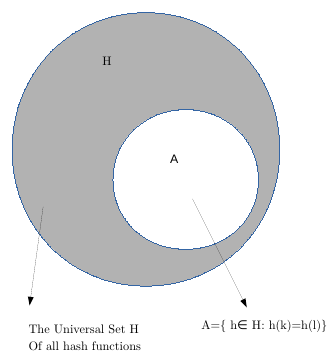 Now if we chose a hash function $h\in \mathscr{H}$ at random then for the said pair of distinct keys $k,l$ we have,

I could not quite find a way to show that: $$\text{Definition 2 $\implies$ Definition 1}$$

Or the way I proved the first implication actually proves the equivalent...

Previously I made an attempt but it was wrong as it was pointed out and so that wrong portion has been edited out.

I had found two similar questions 1 and 2 but it did not quite seem to answer my query.

Both definitions are equivalent, and I think you have almost specified the reason behind it.

The below equivalence work in both ways.

(which is the wording used in Definition 1)

Not the answer you're looking for? Browse other questions tagged hash hashing check-my-answer or ask your own question.