I'm working on optimizing the structure of an optical meta device. I have a randomly generated 2D matrix, where 0,1 represents the presence/absence of a hole. Each structure manipulates light differently, thus giving rise to a unique spectrum.

The problem I wish to solve is to maximize the efficiency of this structure. Given the large size of the solution space ($2^{100}$ in this case), it isn't possible to simulate each structure. Is there any search method I could use to complete this optimization?

A general workflow would be:

Here's a link to a sample hole array.

Apologies for the vague statement of the problem.

The objective function to score a structure: Thank you D.W. for pointing this out. The problem is of course meaningless without an objective function. I'd initially omitted it in the question, so as to not make it irrelevant for this forum by adding too much physics.

The system has a transmission $(T)$ and a reflection $(R)$, so a good objective function would be:

Maximizing $\mathcal{L}$ would Maximize the Transmission while minimizing the reflection.

Based on the suggestions in the comments, I did try out a Genetic Algorithm Approach (basic algorithm given below)

However, though there is a slight increase in the Objective function initially, it saturates quickly and doesn't reach the expected values (Image below X-Axis - Iterations, Y-Axis - Objective Function Value). 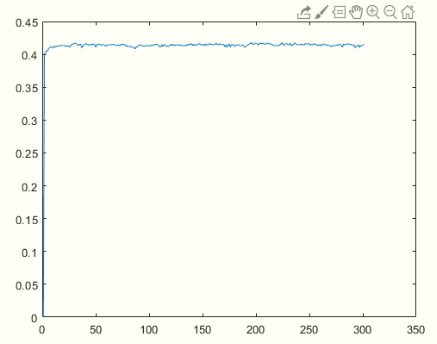 I have tried multiple values of batch size, bitflips (n). Is there any alternate algorithm or any possible modification to the current algorithm?

Browse other questions tagged algorithms optimization search-algorithms or ask your own question.

3
Runtime of searching for a number in an array?
4
Searching a value in a “piecewise” ordered array
1
Are algorithms for searching text vs searching numbers fundamentally different?
2
Searching a sorted array to find the $k$ closest values to a target value $T$
1
Data Searching from a large data set without reading each element
0
Data Structure - Array of Array
5
Searching a Treasure