A configuration of a Turing machine $M$ which runs in space $S(n)$ contains the state, the head positions, and the content of non-blank cells of all the tapes. For $M$ and an input $x$, we define its configuration graph $G_{M,x}$ as a directed graph whose nodes correspond to all the possible configurations and there is an edge from a configuration $C$ to $C'$ if $C'$ can be reached from $C$ in one step.

First question: In Arora-Barak (snapshot below), they say that these nodes can be encoded in a binary string of length $O(S(n))$. Such encoding contains the state, all symbols under the head, and non-blank content of work tapes with special marking to denote the location of the head. I think this is not correct since such an encoding doesn't contain the input head position. If we don't store the input head position, which requires O(\log n) bits, then two nodes can map to the same encoding, which seems wrong. Am I right? Although storing the input head position will not increase the length of the encoding since we are assuming in the book that $S(n) > \log n$. 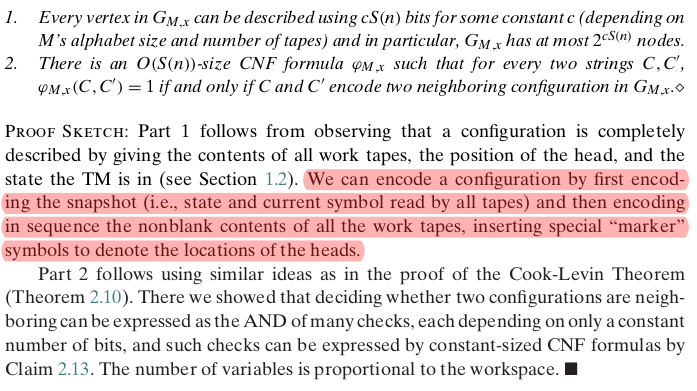 2
The halting problem of Turing machines in view of enumeration of initial tape configurations
1
Example Turing Machine for a time-constructible function
8
Why do we reject turing machines that use space less than the log of the length of the input?
2
Simulating multi-tape turing machines by single-tape TM
0
Number of Configurations of LBA(Linear Bounded Automaton)
0
Out-Degree of a Configuration Graph