Is protein folding really NP-hard and how to show that?

This question has two facets that are related.

Is the general problem of protein folding really NP-hard?

Simplification significantly reduces the computational effort in handling the model, although even in this simplified scenario the protein folding problem is NP-complete.

However, this simplification takes a continuous problem which has some local convexity characteristics in real life into an integer programming problem, because protein folding resembles the problem of finding the global minimum on some continuous energy "cost function", also known as the energy landscape as illustrated by Ken Dill et al., 2012: 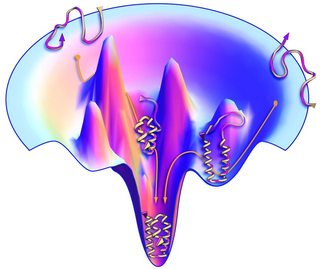 As stated by others, translating a problem defined over continuous domain into problems over the integers or a binary lattice may introduce higher complexity cost. You may think about it as taking a linear problem and solve it using 3SAT solver, any problem in $P$ is presumably reducible to 3SAT. I assume that there is a convex nature to the energy landscape, and this piecewise convexity is beneficial for the search for the minimal energy state.

The work by Bahi et al. really confused me. I expected it to be something relatively simple to reduce 3SAT or TSP to the problem of protein lattice, because intuitively it seems that finding Hamiltonian path could be stated as finding a protein conformation on a lattice.

There are papers in the literature that state that protein folding is NP-hard. I'm not an expert on them, so I don't know to what extent they do or don't address your specific concerns, but you should be able to find them immediately and review their proof. See, e.g.,

Our normal rules are to ask only one question per post.

4
How to reduce to an NP-hard problem?
0
Show that finding a minimum-weight subgraph that includes all marked nodes is NP-hard
3
How to show that a problem is easy?
0
How is the formal definition of NP-hard equivalent to this colloquial one?
3
Show that Halting problem $(\mathsf{HP\text{}})$ is $\mathsf{NP\text{-}Hard}$
6
How to prove that finding math proofs is $\text{NP}$-hard?
8
How to show that hard-to-compute Boolean functions exist?
0
Show that Knapsack-like problem on directed graph is NP-hard
0
How can I show that a problem is not $NP$
0
How Reduction works in proving NP-Hard?