If we want to map abbreviations of full-English words (e.g. map "Jan" to "January"), how can we identify abbreviations which map to multiple words?

How can we construct a trie which maps abbreviations of names-of-the-month to full-month (we map the abbreviation "mar" to "march")?

How can we construct such a trie?
What algorithm will build the appropriate trie from the container of verbose strings?

Consider the English names for months of the year:

We find it useful say that the English names for months of the year are "verbose" strings.
For any "verbose" string $v$, and any string $a$ we say that $a$ is an "abbreviation" of $v$ if and only if all of the following conditions are met:

For example, "jan" is an abbreviation of "january."

Suppose you want to write an algorithm which:

Some examples of input to the trie and output of the trie are shown below:

The output from the trie should be one of:

For months of the year, an application might be a web-page where end-user can type in any half-way reasonable date-format, instead getting an error message.

If you do not like the months of the year application, a different use-case would be to write write your own Linux Shell (similar to BASH). Maybe any half-way reasonable abbreviation of "make directory" will map to "mkdir" In that case, we could have many-to-one mapping from high-level shell-commands to low-level Linux commands.

How can we construct such a trie?
What algorithm will build the appropriate trie from the container of verbose strings.

Also, can we avoid brute-force generating a list of all abbreviations before-hand? The set of all strings form-able by deleting 1 or more characters from the verbose strings is quite large. We would like to avoid combinatorial explosion, if we can.

I am looking for an algorithm, not code written in any specific language.

There are other practical applications than those I originally mentioned.

For example, suppose that you are trying to create a search engine which job applicants use to locate the name of the college they attended.

An example of a verbose string is "The University of Colorado at Denver".

In practice, end-users tend to delete letters from the verbose string. For example, and end-user might type in "UC Denver" or "University Colorado Denver".

Our search engine would still find the correct mailing addres. For this specific example end users could write a dot at the end of the "N" or simply a space character, and it would still work.

We assume that end-users always type in a valid mailing address, but with zero or more characters deleted.

Since the first symbol must match, we can just check it in the beginning, and solve the problem separately for each starting symbol (from here on, we just remove the starting letter from all strings).

First, let's start with without-trie intuition. As an example, consider all permutations of string $abbc$. All possible strings are the following:

where by $\cdot$ I denote our current position in these strings (initially, we are at the beginning of all strings). Now, assume that the symbol $b$ arrives. For each string, we find the first position of $b$ after $\cdot$, and move there. I.e.

Assume that the symbol $a$ arrives next. Again, we find the next position of $a$ after $\cdot$ in all strings. Strings that don't have such positions disappear from our set.

If symbol $b$ arrives next, we have

Solution with trie. Actually, the solution above already works, but it may require $O(\sum_s len(s))$ time (and it often will). We can do better with tries.

First, we build a trie for our strings. 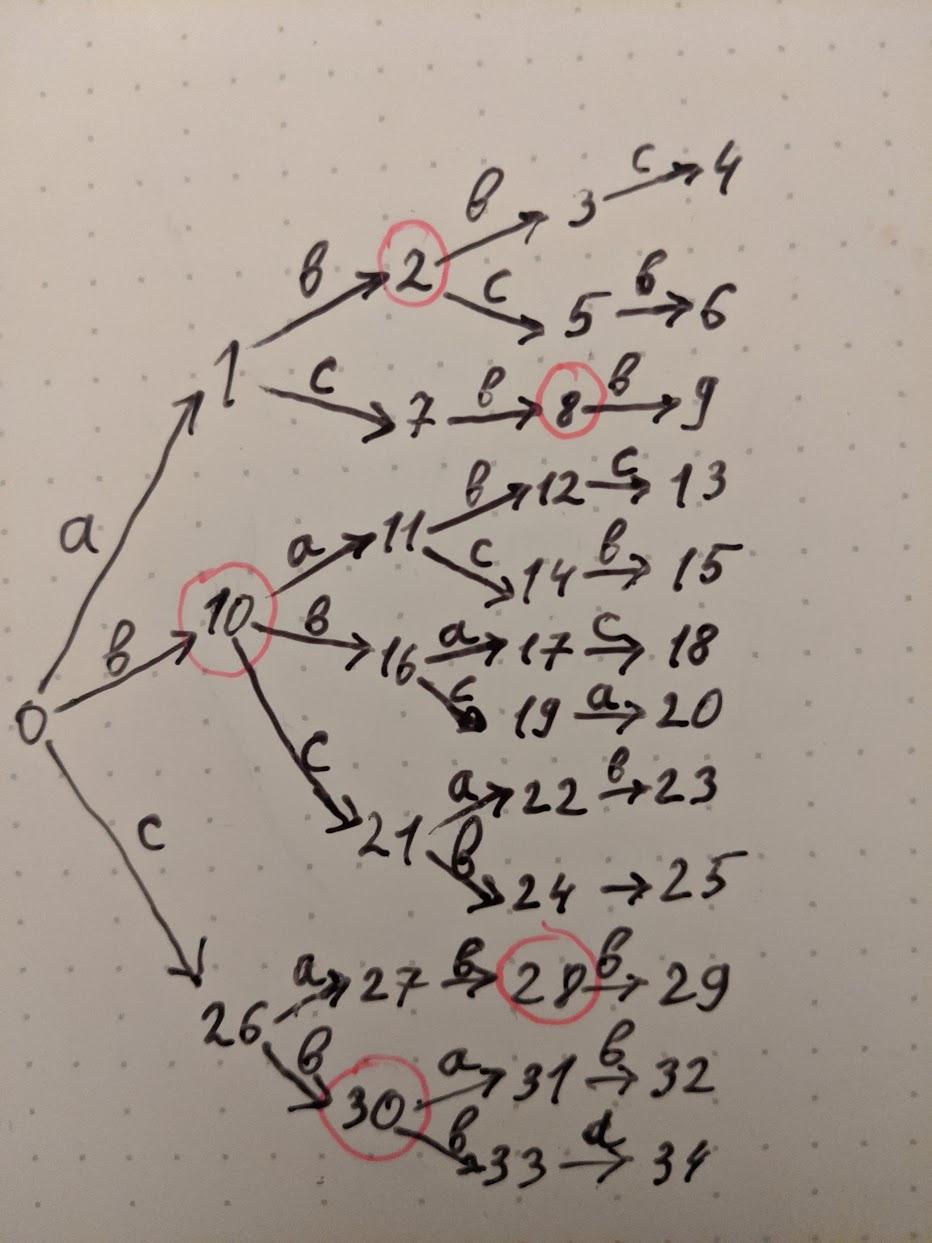 After we have an input symbol $b$, we want to find nodes corresponding to $S_b$ (they are circled on the picture). On each branch, we want to find all nodes which go first after some $b$. Therefore, for each node $u$, we have to find all nodes $v$ such that there exists path $u \leadsto \ldots \to^b v$, and there is no another such node on the path. For example, while for node $9$ there is such path from the root, there is another such node ($8$) on its path.

Now, when we have a string $s$ as an input, finding an answer is as simple as:

, where $next[node][c]$ returns an empty set when it doesn't exists.

Optimization? (I'll update this section if I prove the statements here) While this code works, we may have large intermediate solutions but result in the empty set. One way to avoid it is to do some preprocessing: namely, build a DFA. Each state corresponds to a set of nodes, and transitions are as described in the second algorithm. I think it can be shown that the number of such states depends linearly on the total length of the strings. You also need to store a mapping from states to sets of nodes, and I think it'll also be linear in the total length of the strings.

This is in the end a programming question, and programming has to be effective - produce the result, minimising the cost, which is mostly the cost of programming.

For 12 items you don’t create any complex data structure. For example, in Swift you would write

and you’re done. But what you plan doesn’t work anyway. For example, in German “März” is abbreviated as “Mrz”, not “Mär”. And typically the abbreviations used are fixed, not arbitrary numbers of letters.

Not the answer you're looking for? Browse other questions tagged strings search-trees substrings information-retrieval string-matching or ask your own question.

4
NFA models with characters on nodes, not edges
2
Algorithm to identify if a string of numbers is a lottery sequence
4
Have I invented a new data structure?
2
Infix search in millions of strings
2
Can we solve this problem more efficiently than trying all possible combinations
2
Is there an algorithm to find the smallest set of the shortest prefix substrings of a continuous numeric sequence?
0
Find the maximum number of contiguous occurrences of smaller string s in a larger string l