This is a question from my university's previous paper. But i couldn't find a decent answer. Actually i am confused about how can a developer minimize the time-complexity for any recursive function. I get that if there is a tail-recursion then space complexity can be minimized. But can't get the idea of time-complexity.

One thing comes in mind is memoization. Simple well studied problem for this is Fibonacci numbers, simple recursion is as follow:

But with memoization, we can use an auxiliary array to get rid of extra calls:

The memoization technique sometimes uses more memory, but very faster in time, and one of a tradeoffs that software developer should be care about it is this.

Explanation of the memoization of Fibonacci numbers:

First we create an array $f$, to save the values that already computed. This is the main part of all memoization algorithms. Instead of many repeated recursive calls we can save the results, already obtained by previous steps of algorithm. As shown in the algorithm we set the $f[1],f[2]$ to $1$.

In the first if we actually check whether we are in the start or not. But we can remove this if statement. But for make it simpler to read I left it.

In the second if, we check if the value of fib(n) is already computed or not. This prevents us from multiple call for the same number, for example suppose we want to compute f(6), then in normal recursion we have the first recursion tree as shown in the following figure and in the memoization version we have the second tree. The reason is, in memoization we just compute the green vertices one time and then we save them into the memory (array $f$) and if needed we fetch them later.

In the following figure, green nodes are parts which are necessary to be computed (in this way), yellow nodes are precomputed ones, and red nodes are the nodes that are repeatedly computed in the first recursion. 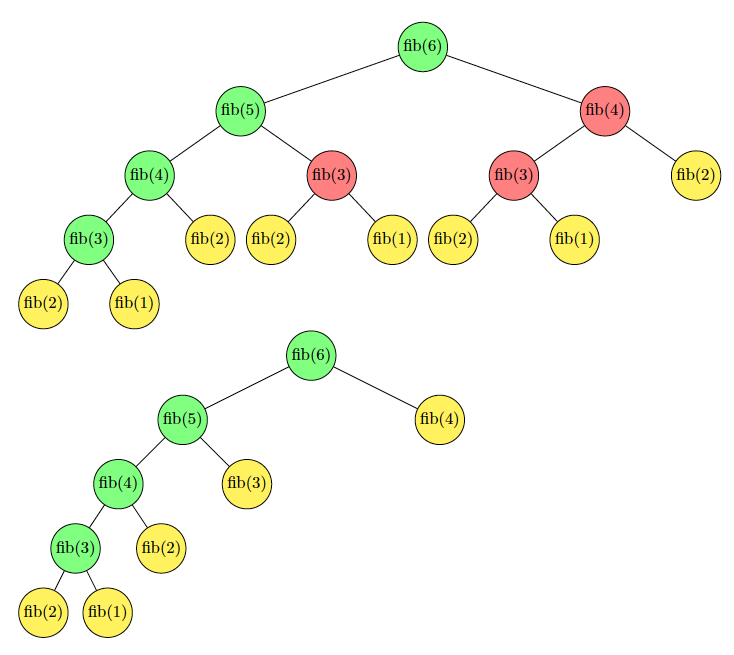 Not the answer you're looking for? Browse other questions tagged algorithms time-complexity space-complexity or ask your own question.

5
Relation of Space and Time in Complexity?
6
Is this in-place merge algorithm efficient or not?
1
Space and time complexity of balanced parentheses enumeration algorithm
6
Algorithm: Shortest path (walk) with keys and doors
5
Time and space complexity of Radix sort
1
Complexity of recursion T(n) = 2T(n-1) + C?