Confused between the terms Process and Process Control Block

I was reading about the Long term scheduler, when I read that when memory is not enough and load on the CPU due to multiprogramming is too high, a process might be moved to secondary storage space (namely swap space). I am slightly confused as too what exactly happens when a process is moved out of memory. Is its "PCB(Process Control Block)" moved out and store in Hard disk or something else like "process state".

I believe that this confusion is due to lack of clarity between "process in memory" and "process control block". Are the two things different or the same? 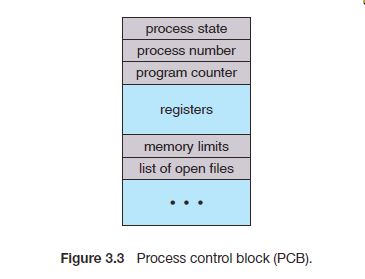 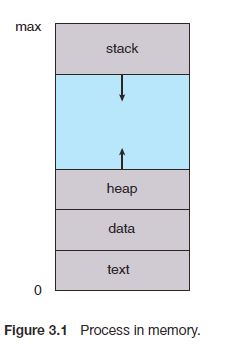 The above two diagrams have been picked from the 3rd chapter of Operating Systems Concepts 9th edition.

The point of swapping is to make room in RAM. What is moved to disk is what the book calls “process in memory”, not the process control block. The PCB block is a small amount of memory, so moving it to disk wouldn't help much. Additionally, some of the PCB is necessary even if the process is never scheduled, for example to know whether a file is open or not (which matters if the file is deleted or when taking a lock on the file), to know what events (such as I/O becoming available) might cause the process to become runnable (this information would be in the “process state”), and the knowledge of where the process data is in the swap space (that would be the process's “memory limits” while it's swapped out). In contrast, none of the process's own memory is necessary while the process is not scheduled.

Not the answer you're looking for? Browse other questions tagged operating-systems process-scheduling or ask your own question.

12
Swap space management during pure demand paging
0
Disk scheduling and process scheduling
5
Mutex implementation on top of a minimalistic preemptive scheduler
4
What's the difference between Process Context and Process Control Block?
3
Paging: Does the page table of a process also gets swapped out when the process gets swapped out from main memory?
0
Why can't OSes swap out processes that are waiting for I/O?
6
Why operating system needs interrupt stack, if it has process control block?