Every integer rectangle area in the list (multiset) must be used exactly once (corresponds to exactly one rectangle). 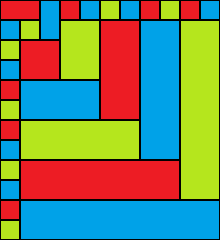 which uses the given list to tile a $11\times 12$ rectangle.

So far, I've found What rectangles can a set of rectangles tile? on MO, and am trying to track down and adapt the references to my problem.

A similar but different problem is Filling rectangles with integer-sided squares.

This answer assumes that you only allow the tiles to have integer sides.

There are always some trivial tilings, in which the rectangle being tiled has either a single row or a single column. Counting the number of these is simple combinatorics. Let us show that deciding whether there are any other tilings is NP-complete (under randomized reductions, or assuming some number-theoretic conjectures). It is clearly in NP. To show that it is NP-hard, we reduce from PARTITION. An instance of PARTITION is a multiset of positive integers, and the problem is to determine whether it can be partitioned into two multisets with equal sum.

Not the answer you're looking for? Browse other questions tagged algorithms reference-request or ask your own question.

4
Finding a minimal containing rectangle from a given set of rectangles
8
Algorithm for solving planar constraint problem (“Pokemon Go monster finding”)
2
Reconstruct graph of N edges from a matrix of shortest pair distances (N*N) (i.e. result from Floyd-Warshall algorithm)
1
Minimum Number of Integers From a List that Add up to N (Dynamic Programming)
2
Algorithm to find player position in a 2D grid when all you know is the directional steps he has taken
2
Permuting integer vectors $x$ and $y$ which add to integer vector $z$