Included below is a toy example. Here, we have three colors, two tastes and three smells. The connectivity is as shown on the left. The optimal solution is shown on the right. We can see that there are three paths that can cover all possible colors, tastes and smells. Hence, three fictional fruits will suffice and are the minimal required (since there are three colors and smells, we couldn't have done it with less than three).

One algorithm that comes to mind is the minimal path cover for a DAG. However, the well known formulation of that problem requires the paths to not share any vertices. We can see in the solution above that this constraint only gets in our way for this problem. The optimal solution does indeed have two paths that share a common taste vertex ($t_1$). Hence, it doesn't immediately apply. 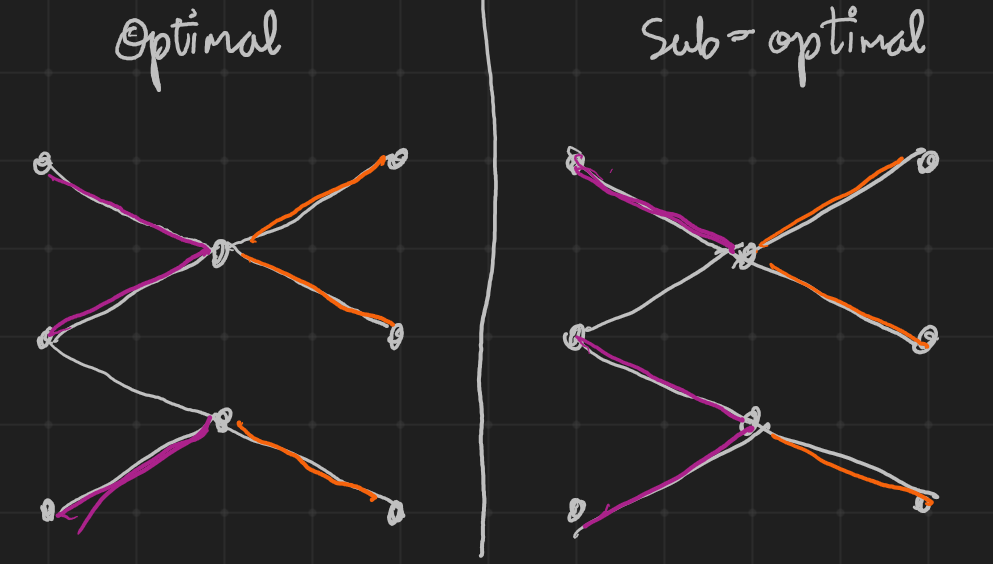 So, how do we fix the algorithm above? We want to encourage the behavior on the left from the min-edge cover and discourage the behavior on the right. We observe that $t_1$ is a "super-vertex" with more colors and smells attached to it. So, we can assign the edges emanating from it lower costs. Then, we can modify the min-edge cover algorithm to prefer the edges with low costs. One approach would be to take the minimum of the number of colors and smells attached to each taste and divide $1$ by this. Then all edges emanating from that taste get this as the cost.

This algorithm will work for our toy example. However, how do we prove its optimality in general? And if it isn't optimal, how do we devise an optimal algorithm?

I think this can be solved by reduction to a circulation problem.

Introduce a graph with source $a$ and sink $z$. The edges are as follows:

Find the minimum cost solution to this circulation problem. I think there exists an integral solution, and it can found in polynomial-time.

For this use Hopcroft-Karp algorithm to get the maximum cardinality matching and complete with arbitrary edges for the unassigned taste vertices. Let's call $E_L$ this subset of $X$.

As first step, use Hopcroft-Karp algorithm and complete arbitrarily to get $E_R$, subset of $Y$.

Else there is a max flow problem to solve. Let's create a source with edges to every element of $M_L$ and a sink with edges coming from every elements of $M_R$. All these edges have weight 1.

Now every augmenting path you find let you change your fruits to generate a new fruit that will cover both a color of $M_L$ and a smell of $M_R$.

When there is no more augmenting path, the remaining unassigned elements of $M_L$ and $M_R$ have to be covered with different arbitrary fruits.

Not the answer you're looking for? Browse other questions tagged graphs combinatorics discrete-mathematics or ask your own question.