Algorithm to shrink a DFA by introducing nondeterminism?

This is somewhat related to another question I asked, but I feel it's different enough to warrant its own question.

I'm doing research where I'm trying to find the structure of complements of a certain class of finite languages. It's easy for me to get the minimal DFAs accepting these languages, but I'd like to examine what kind of structure NFAs accepting these langauges have, particularly how nondeterminism helps with state-size of the automata (the DFAs are exponentially large).

What I'm wondering is, are there algorithms which can start with a DFA, and shrink it into a smaller NFA by introducing nondeterminism? Are there "standard techniques" to do this?

I have found preorder reductions, which look promising but hard to implement. I'm open to many suggestions.

For efficient heuristics I'd suggest looking into the CAD literature on the state encoding problem (assigning binary identifiers to states of a DFA to minimize the amount of logic for the state transition function.) Devadas and Newton, "Decomposition and factorization of sequential finite state machines," IEEE TCAD, 8(11):1206-1217, 1989 points out that there is a close relationship between state encoding and state machine decomposition.

If for a DFA with $N$ states you assign a unique $M$ bit state identifier to each state ($\lg_2N < M\leq N$), then you have essentially decomposed the DFA into a network of $M$ interacting two-state machines. Equivalently: you have defined a set $S$ with $M$ elements, and assigned a unique subset of $S$ to each state in your original DFA. This is also what the Rabin-Scott powerset construction algorithm does. So by doing a state encoding on the DFA we are trying to reverse engineer the set that the powerset construction algorithm started from.

In the traditional state encoding problem all encodings are legal, and there is some objective function (related to the amount of logic in the state transition function) that you are trying to minimize. To generate an NFA you need to solve a constrained version of the enconding problem where:

an encoding of $M$ bit identifiers to the DFA states represents an NFA iff for each symbol in the alphabet the transition function for each bit is a simple disjunction of bits. (No conjunction or negation is allowed.)

So you could enumerate all the $M$ bit encodings for all $\lg_2N < M\leq N$, and check whether each one satisfies the constraint. (Note that for $M=N$ the trivial "one-hot" encoding always satisfies the constraints, and gives you the DFA.) The enumeration is ridiculously large though, (Di Micheli's textbook gives it as something like $\frac{2^M !}{(2^M - N)!M!}$.) The reason I'm suggesting the CAD literature is that there are techniques for doing this search implicitly rather than enumerating (for example, by using BDDs, see Lin, Touati and Newton, "Don't care minimization of multi-level sequential logic networks," Int'l Conf Comp-Aided Dsgn ICCAD-90:414-417, 1990.

Take the following DFA, (with a state encoding that I derived by cheating (I generated the DFA from an NFA using Rabin-Scott, and the encoding represents the subsets chosen by Rabin-Scott.)) 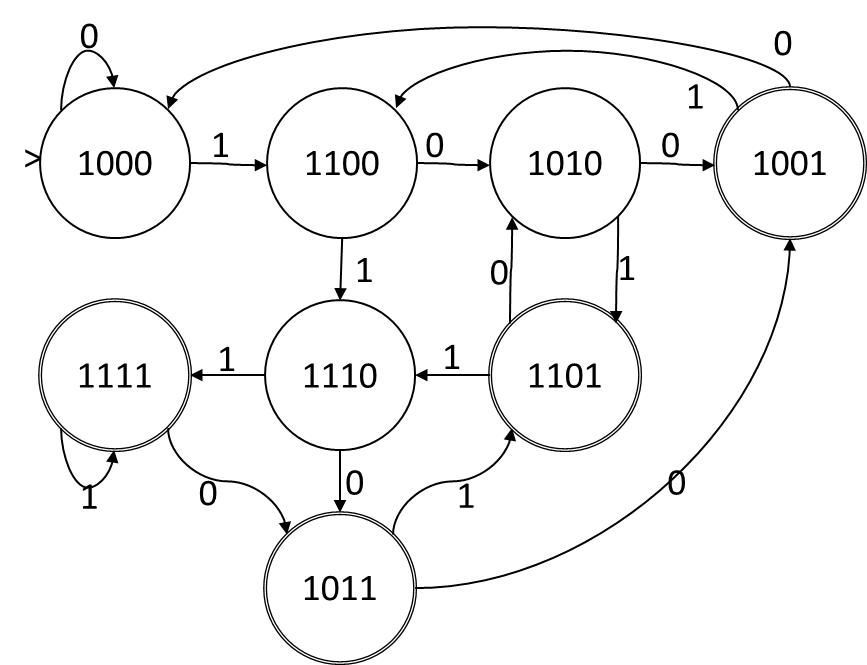 Minimising NFAs is hard, so hard indeed that even approximation is hard; see Minimizing NFA’s and Regular Expressions by Gramlich and Schnitger (2005). This article seems to have some useful references, too, e.g. NFA Reduction Algorithms by Means of Regular Inequalities by Champarnaud and Coulon (2002) which contains minimisation techniques.

There exists some notions of canonical FSAs that are not necessarily deterministic, hence can be smaller than the minimal DFA. One example is the "Residual" FSAs, for which one can compute canonical residual FSAs quite directly, see F. Denis, A. Lemay, and A. Terlutte. "Residual finite state automata", Fundamenta Informaticae 51(4):339-368, 2002. Several alternatives exist.

Not the answer you're looking for? Browse other questions tagged formal-languages automata finite-automata discrete-mathematics nondeterminism or ask your own question.

4
Are there algorithms to exactly minimize NFAs which are sometimes efficient?
-1
What is the trade off in converting a DFA into a NFA?

4
Are there algorithms to exactly minimize NFAs which are sometimes efficient?
3
A modified version of two way DFA
4
The upper bound on a Nondeterministic Finite Automata's configurations number
0
Constructing an FSA, where Ratio of number of states of FSA to its Minimal DFA Equivalent < 0.5
3
Is this language $X = \{x:xxx\in L\}$ regular?