MST and some facts via an example

My notes tell me that the first and last is false. I need some idea of how to understand the validity of these sentences in a more simple and concise manner.

I'll use the following example to illustrate each statement. The graph below will be $GR$.

Below is the MST $M$ of $GR$. These are the bolded edges.

The second statement is true. It is pretty easy to see why $M-\{A\}$ in this case is still an MST.

The third statement is true. 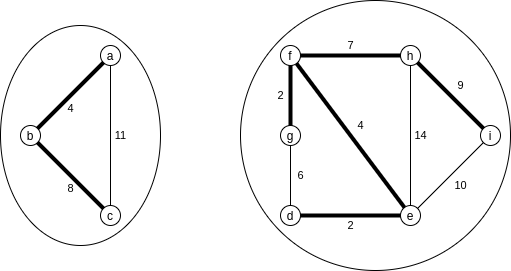 I hope this helps!

Not the answer you're looking for? Browse other questions tagged algorithms graphs data-structures trees or ask your own question.

3
What edges are not in any MST?
3
Find an MST in a graph with edge weights from {1,2}
4
Find a MST such that it's mostly red (original graph's edges are colored red and blue)
3
Shortest paths in weighted graphs, and minimum spanning trees
8
Updating an MST $T$ when the weight of an edge not in $T$ is decreased
5
Is the inverse of MST cycle property always true? Why?
1
Shortest path tree from each vertex implies a unique MST?
1
Finding a cycle in a graph with the biggest value (the sum of all edges)
1
facts on tree and MST