Note: Remove all vertices of degree $0$.

The idea is to have $m$ graphs like the below one. 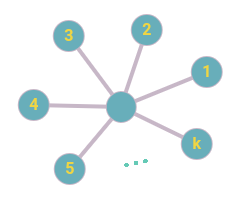 But how can I prove this proposition formally?

Thank you in advance for your answers.

A side note: the subgraph induced by the vertices in $c(v)$, for any $v$, is a "star" graph (similar to the one you attached, yet the number of vertices that are neighbours of $v$ in this subgraph can be strictly less than $k$). The idea is to consider star graphs corresponding to the vertices in $C$, and then use the union bound for sets.

Now $C$ being a vertex cover implies that $\bigcup\limits_{v\in C} c(v) = V$. This is easy, yet we prove it for completentss: the $\subseteq$-containment is trivial. The other direction follows as for every vertex $v\in V$, one of the following holds:

Not the answer you're looking for? Browse other questions tagged graphs vertex-cover or ask your own question.