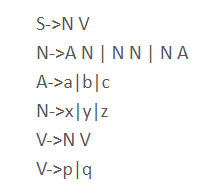 Can I create RE's from this? What is the reason? I want to fully understand why I can and why I cannot. Thank you.

There is no real procedure in converting it, so we will take it step by step. First we need to see what kinds of strings the variable N can produce.

Finally, S produces NV which is similar to our RE for V. Note that there is at least one N produced. So that CFG is converted to $(a^*x^+a^*)^+p$.

To put it in terms of your original grammar, it would look something like this $((a|b|c)^*(x|y|z)^+(a|b|c)^*)^+(p|q)$. Again, because of the amount of terminals in the original grammar, it is easier to simply things to help see the pattern the grammar is actually showing.

As a disclaimer, this is not a proof, but it shows the reasoning as to how I created an RE from the CFG you provided. To know if this is correct, you would need to know the exact language the CFG produces. Unfortunately, the grammar is not easily recognizable.

I used the following CFG Developer tool to help see a pattern from your grammar.

Not the answer you're looking for? Browse other questions tagged context-free regular-expressions or ask your own question.