State machine with knowledge of prior states?

I'm attepting to model a process flow where the transition to the next state is occasionally based on not only the input to the current state, but a prior state as well. 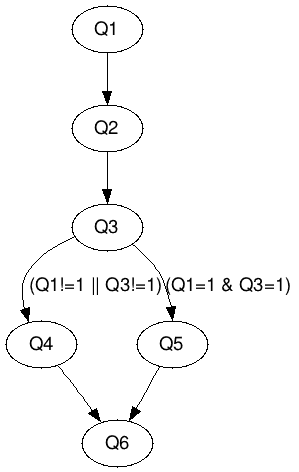 I understand that it would be possible to model this using a finite-state machine where we duplicate any states between those that we are interested in. The example below demonstrates this with States Q2a and Q2b corresponding to the differences in input at state Q1

However, as the number of conditions and the gaps between them grows (both of which are possible in the process I'm looking at), the number of states grows exponentially.

In digital design we would call the thing you are looking for an algorithmic state machine. In compiler design we would call it a control flow graph. The idea in either case is that you divide the state problem into two parts, one part represents the control state, the other part represents the data path. You label the states with how you want the data path to be modified, and the data path has some boolean outputs that you use to determine which way the control state should change.

Formally, you are describing a Moore machine where each state describes a set of control signals that will be sent to tell the data path how to modify itself, and the data-path in turn has a small set of boolean outputs that are used as the input language to the control state machine.

Your original problem would then have a control state, Q, and two variables, v1 and v2 and the graph would look something like:

In Petri nets, state is distributed; basically, there is no distinction between state transitions and messages. This allows a much more compact representation of certain types of systems, which may or may not include the sorts of systems you are trying to model. They may be particularly useful if your inputs and output signals cannot queue up. 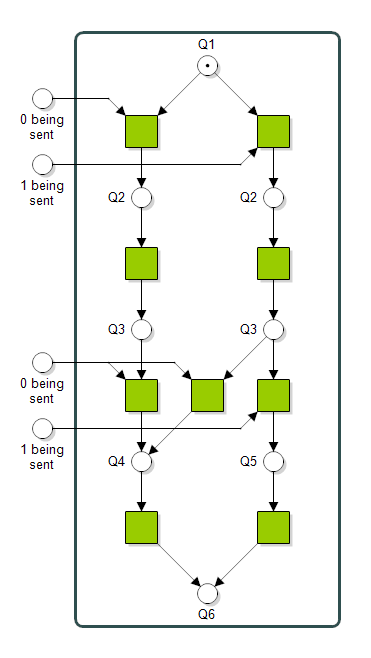 2
Converting final state PDA to empty stack PDA
2
Deleting useless (dead) states from a finite automaton
4
Proof that PDA's with different definitions have same expressive power
3
Are finite state transducers and Mealy machines the same machines?
3
Understanding trap and dead state in automata
0
What the State is, and Where it comes from, when Generating Reachability Graphs
2
Benefit of Petri Net Transition as Separate Object
4
Do multiple transitions over the input give finite state machines more power?
1
what is the difference between transition function (delta) and extended transition function (delta cap ) in finite automata