Do you have any other ideas to maximize the function $f$ ?

Instead, we could use binary search with $x=a+\lfloor\frac{y-c}{d-c}(b-a)\rfloor$, which corresponds to the below intersection of the dotted purple line denoting $y$ and the line from $f(a)=c$ to $f(b)=d$. 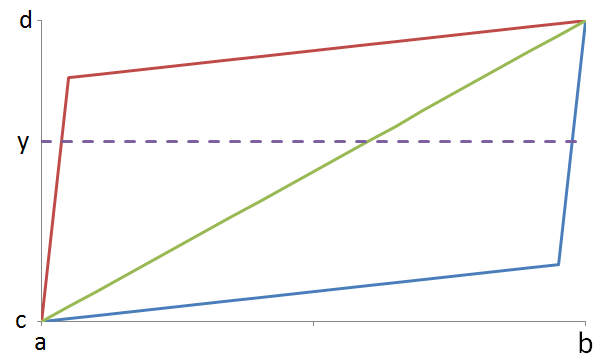 The red and blue lines represent the extremes of strictly monotonic functions. When $f$ is linear, this would immediately find the closest $x$ (which is a big improvement over binary search with the midpoint). Without additional information, I think linearity is the best assumption you can make; there are as many concave functions as convex functions, as well as functions that switch.

One justification for not using gradient descent is if an array $[a,a+1,\dots,b]$ is simply mapped to another array of the same size but different range of data $[c,d]$, which is randomly chosen (and sorted).

Not the answer you're looking for? Browse other questions tagged algorithms optimization or ask your own question.