How to evaluate a Kleene's Closure through CFG and attribute grammars

For T = {a, b,*,(,)} and an arbitrary production rule I created to represent a simple regular expression

What would be an attribute grammar which can calculate the set of all strings that the regex can evaluate.

For example if we generate b(a)* Then the output generated by regular expression would be a set of infinte strings {b,baa,ba,baaa......} using set valued expression in the attribute grammar.

I am not sure how to represent set valued concatenation and Kleene closure.

It is rather easy to construct regular expressions that represent very complex languages, that the reader needs to descypher to make sense of it.

[I have indexed the variables of the rules for clarity.]

Similarly for the Kleene star operation, here the syntactic notation $*$ in the expression, and in the production rule, is translated into the semantic operation Kleene star on languages which has the intended meaning. Thus $S_0\to S_1^*$ with semantic rule $S_0.\text{val} = (S_1.\text{val})^*$

Once however, in a compiler setting, I have seen a different approach. There the semantic value of the expression was not a language, but a finite state automaton (non-deterministic, with $\varepsilon$ rules). In that way the intended meaning of the expression is nicely captured in a computable fashion. The operations in the semantic rules are then the concatenation and star constructions on automata.

In that case, the operations you are looking for is Thompson's construction. 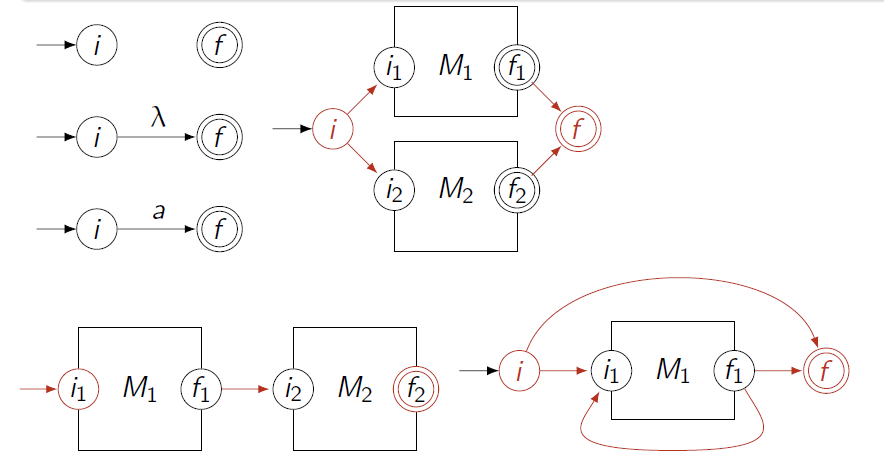 11
Expressiveness of modern regular expressions
10
Constructing all context-free languages from a set of base languages and closure properties?
1
Ambiguity vs. context-sensitivity
4
Do CFGs generate many languages?
7
Steps to convert regular expressions directly to regular grammars and vice versa
0
Closure properties between two languages from different grammars
3
Does this context-free grammar generate a regular language?
4
Is there a recommended process for designing CSGs (other than intuition)?
3
How to use homomophism in closure proofs?
1
Difference between regular grammar and CFG in generating computation histories and $\Sigma^*$