Maximise the value of the minimum weight intra edge

I've been doing review problems for a midterm and I came across this one problem that I haven't been able to solve. The problem essentially says that given a complete graph $G=(V,E)$ partition the vertices into two subsets $A$ and $B$ such that weight of the smallest intra edge (i.e. an edge $e=(u,v)$ such that $u$ and $v$ belong to the same subset) is maximized. The graph has $n$ vertices and $k$ weighted edges.

The edges with no weight can be assumed to have infinite weight. The required runtime is $O((n+k) \log k)$.

I thought of this in two ways:

The second approach doesn't work because there could be a smaller edge among two vertices in the same subset.

Could someone please help me with this?

As I mentioned in the comments, the algorithm could be like this:

Therefore, once you add an edge within a component between two vertices of the same color, you are done.

If $G'$ is bipartite, then the two sides of a bipartition will give you a partition of $V$ such that every intra-edge has weight at least $x$. This shows that $x \le x^*$.

If the edges are already sorted by their weight, or if the edge weights are polynomially bounded (w.r.t. $n$) you can improve the above time complexity by a factor of almost $\Theta(\log n)$.

The idea is as follows: maintain a disjoint-set (union find) data structure $U$ on the vertices of $V$, such that if $u,v \in V$ belong to the same set in $U$, then they must also belong to the same side of the bipartition of the last tested graph $G_x$. 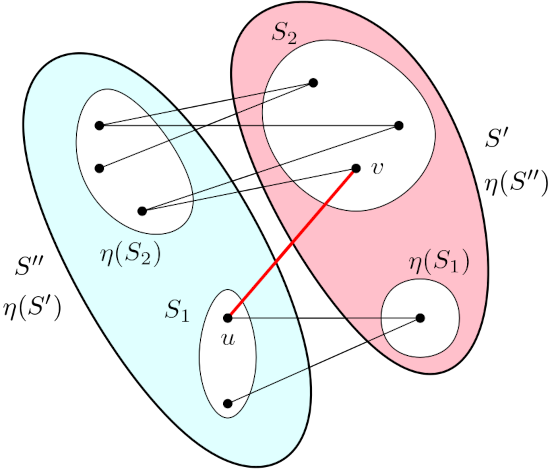 If all edges in $\Delta(x, x')$ are processed without ever encountering case 1, then $G_{x'}$ is bipartite.

The final algorithm checks whether $G_x$ is bipartite for $x \in W$ in order, until $G_x$ becomes not bipartite. Then it returns the predecessor $y$ of $x$ in $W$. The actual partition of $V$ can be found using standard techniques (the laziest one is to find a bipartition of $G_y$ from scratch).

All the sets $\Delta(x, x')$ can be found in time $O(n^2)$ once $E$ is sorted w.r.t. $w(\cdot)$ (if $E$ is not already sorted we can use radix sort and the fact that the weights are polynomially bounded). Moreover, the number of find operations is $O(n^2)$ and the number of union operations is $O(n)$. Thus the overall required time $O(n^2 \alpha(n))$ where $\alpha(n)$ is the inverse Ackermann function.

Notice that $\Omega(n^2)$ is a trivial lower bound for your problem.

Not the answer you're looking for? Browse other questions tagged weighted-graphs partitions or ask your own question.

21
Do the minimum spanning trees of a weighted graph have the same number of edges with a given weight?
6
Dividing a weighted planar graph into $k$ subgraphs with balanced weight
3
Proof for variation of Prim's and Kruskal's to find maximum-weight acyclic subgraph
1
Shortest paths when edge weight depends on previous edge
0
Decreasing the weight of one edge of minimum spanning tree, prove the MST is unchanged
1
Finding a minimum weight path with certain restrictions