What is combinational circuit?

I'm reading the Digital Design and Computer Architecture by David Harris, Sarah Harris. The authors give the following definition of combinational logic:

However, they claim this circuit is not combinational: 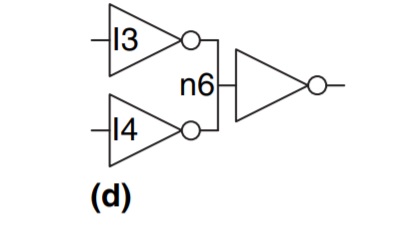 because "node n6 connects to the output terminals of both I3 and I4". Indeed, it's one of the designated signs when a scheme can not be combinational but, according to the authors:

Certain circuits that disobey these rules are still combinational, so long as the outputs depend only on the current values of the inputs.

As I'm able to catch on, the aforementioned circuit is the case: its output is 1 if and only if its inputs are both 1, otherwise the output is 0. So the output is defined as a function of the inputs (the AND function).

In fact, there was already a question about this circuit and it has an accepted answer. Here's an excerpt from it:

Unfortunately, I'm still confused due to

I need some elaboration. Maybe things would fall into place if someone provide a circuit example when two gates outputs is connected to one input and it actually causes "memory" (in contrast to the considered sample).

For me a short-circuit isn't combinatorial nor sequential. It's an error, it may fry the circuits.

The circuit, regarded as a black box, is still in scope of the combinational logic definition: its output values depend only on the current values of the inputs;

You can make a logic inverter with high power relays. You set opposite tensions, the relays or the wires connecting them turn into melted metal. You have a memorised effect (blown circuit) : It is sequential!

Not the answer you're looking for? Browse other questions tagged computer-architecture digital-circuits or ask your own question.

1
Why is c) a combinational circuit, but d) not?

3
How is clock syncing implemented?
2
Converting a digital circuit to two layers of OR and AND gates
4
Using analog values with Algebraic Normal Form?
3
Efficient method for generating the smoothing function
0
Addition of 3 bits using Full Adder when the initial carry bit is 0
1
Minimizing a multiple output circuit with K-maps - and without
1
How many functions require precisely $n^2$ gates?
1
A query regarding Definition of Circuit Family and Languages