How can we find the number of pairs of intersecting ranges on a circular number line?

I recently thought of and managed to solve this algorithmic problem:

On a infinite 1-dimensional number line, we have N ranges specified by two distinct integers A and B, such that all A and B are unique. Each pair of integers then represents the starting and ending points of a range on the number line. How many distinct pairs of ranges intersect?

^^ In this example, 4 distinct pairs of segments intersect.

Obviously, there is a O(N^2) brute-force solution: just test all possible pairs in O(1) time each. However, I also thought of a O(NlogN) sweep-line algorithm: treat every A as a "segment start event" and every B as a "segment end event". Then, keep a variable curr_in_range (originally 0) that stores the current number of segments that we currently see, and then iterate through the events in sorted order of their positions on the number line. Every time we add another segment, add curr_in_range to the answer (because this new segment will intersect with every other segment that we can see) and increment it as well. Every time we remove a segment, decrement curr_in_range. In the end, this gets us the correct answer.

Happy with this algorithm, I decided to tackle a slightly modified version of this problem: What if the number line is circular? As in, it has a specified length L such that the number line contains numbers in the range [0, L)? In this case, each range would still be specified by two distinct integers A and B, but let's just say the range is always counterclockwise starting from A and ending at B. Could we still find the number of pairs of sectors that intersect in less than O(N^2) time in this scenario?

Here's my thought process on this problem:

We should be able to use a very similar algorithm to the one described above. Completely copying it wouldn't work, though, because the sectors can have B < A when it crosses over 0. My idea was to initially have curr_in_range equal to the number of sectors that cross over 0 (instead of just it at 0 like we did in the above algorithm). Then, we could treat every sector as a "sector start event" and a "sector end event", and do the same process that we did.

However, after extensive analysis, I found why this approach doesn't work. This approach won't work because it overcounts some of the intersections, as sometimes two sectors can intersect in 2 places. This is where I'm stuck. 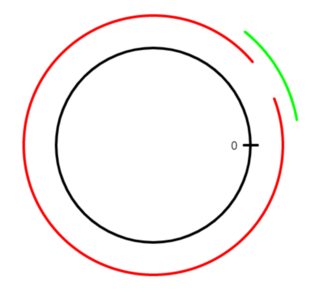 ^^ Our sweep-line algorithm will count 2 distinct pairs that intersect, when there is actually only 1.

So, sorry for a really long post, but my final question is:

Can someone come up with an algorithm that solves this problem? Is my thought process close to a solution or completely off?

Reduce to the hard case

Here are the notations and assumptions for the ease of explanation.

Suppose there are $n$ ranges. The question is how to compute the number of all unordered pairs of two intersecting ranges efficiently.

There are three cases for an unordered pair of two ranges.

Transform to the containing pairs of non-wrapping pairs

Given any range $r$, let $\overline r$ be the numbers among $0, 1, \cdots, L-1$ that are not in $r$, i.e., the complement of $r$ with respect to $\mathcal C$. Note that two ranges do NOT intersect iff the complement of either one contains the other.

An algorithm that counts the number of containing pairs

Here is an algorithm that counts the number of containing pairs between two given sets of non-wrapping ranges, $\mathcal N$ and $\overline{\mathcal W}$. It is, basically, sweep-line technique together with Fenwick tree.

The sections "Reduce to the hard case" and "transform to the containing pairs of non-wrapping pairs" follow D.W's answer roughly.

This is solvable in $O(n \log n)$ time, too, by considering the complement of the intervals that wrap around and using a suitable data structure.

There are two types of intervals that can appear on a cycle:

Not a solution, just an illustration of what I see as the core difficulty:

The instance on the left has 3 intersections, the one on the right only 2, but there is no way to distinguish the instances just by counting numbers of "begin segment" and "end segment" events within a given interval. (Inside the gap left by the red interval, the event sequence is "begin", "end" in both cases.)

This implies that a sweep-line approach needs to track more information about each active segment -- probably their identities, which suggests to me that no fast algorithm will be possible, though that's just a feeling.