Given $k$ and $N$, and a set $S$ of $N$ distincts $k$-dominoes, I want to find the longest sequence of dominoes constructible using each domino in the set $S$ at most once.

My ideas so far are to use some kind of backtracking algorithm: I try to complete a sequence of dominoes with a new domino – among those not used, or not eliminated – and if it is valid, I continue; if there is no valid domino, I delete and elimininate the last domino to try again. I am using hash table to keep track of the remaining dominoes.

I wondered if there is a more efficient/elegant way to do it, maybe by pre-sorting the set $S$ before trying to construct sequences of dominoes, or using dynamic programming in a way I haven't found yet.

I also thought of constructing a graph with each domino as a vertex, but I don't really know how to put edges because of the two faces of the domino: if I add an edge between two dominoes that have a common value, then I risk to find $\langle 1,2\rangle\langle 2,3\rangle\langle 2,0\rangle$ as a valid sequence…

One of the ideas proposed in the comments is to construct a graph where vertices are integers of $[\![0,k-1]\!]$ and edges are dominoes of $S$ (domino $\langle a , b\rangle$ is an edge between $a$ and $b$, possibly a loop if $a = b$). The question is now equivalent to finding a longest path in this graph. The problem is that it is not similar to longest path problem because the path are not necessarily simples (meaning a path can cross the same vertex multiple times). One would need to keep track of used edges to find the longest path, so it does not really simplify the problem.

The problem is difficult and seems even $NP$-hard, but I still want to find an efficient algorithm solving it. My current backtracking solution find the answer for $k = 20$ and $N = 30$ in 10 sec (for a randomly generated set of distinct dominoes), but it increases quickly if I lower the value of $k$ or increase the value of $N$ (even $k = 15$ and $N = 30$ is taking ~30 minutes).

Regarding each given domino as an edge in a graph connecting the vertices labelled from $[\![0, k-1]\!]$, with "doubles" $\langle j,j\rangle$ handled separately, we need to answer:

Either as given or as adjusted by removal, a Eulerian path can found using e.g. Hierholzer's algorithm

Handling doubles: These can be kept as a separate list; they are included if there is any other connection to that value (vertex). If consideration is made of which dominoes to ignore, if a double is attached to a node that otherwise has only degree one, this could change the optimum set of dominoes to exclude since the double would also then be unused.

Extra note: finding the paths that connect the odd-degree nodes may not permit keeping the graph connected in some cases, even limiting that to a substantial disconnection (more than just leaving an isolated node), especially if the edges (dominoes) are relatively few and the vertices (values) many. Finding bridges in the graph would allow detection of this case; these can be found in linear time. Example graph: 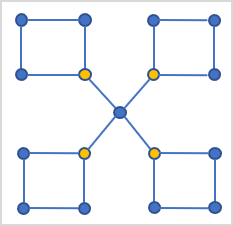 Not the answer you're looking for? Browse other questions tagged algorithms dynamic-programming backtracking or ask your own question.