Well in many texts and places I have seen a called statement, which claims it self to the famous "Church Turing Thesis".

I have seen many texts say that based on Church-Turing Thesis :

"Anything that can be done by a digital computer can also be done by Turing Machine".

Peter Linz text roughly says that the thesis is :

"any computation that can be done by "mechanical" means can also be done by TM".

Linz even adds that mechanical term is not well defined. So TM can serve as a definition for mechanical machine.

A look in the Wikipedia says:

It states that a function on the natural numbers can be calculated by an effective method if and only if it is computable by a Turing machine.

The Wikipedia indeed defines or considers Turing Machine to be that "mechanical" standard.

Googling about mechanical computation, results in the picture of a device something like this: 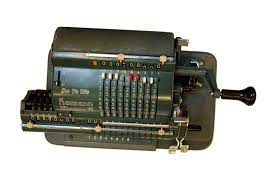 Even Ullman text has a proof of equivalence of TM and modern computer using the simulation of instruction set... But there the authors make a twist by saying they assume their digital computer says "yes" or "no" for input given.

The definition came in the 1936 papers of Alonzo Church and Alan Turing. Church used a notational system called the λ-calculus to define algorithms. Turing did it with his “machines.” These two definitions were shown to be equivalent. This connection between the informal notion of algorithm and the precise definition has come to be called the Church–Turing thesis.

So in that case are our modern computers more powerful than a TM ? What is this mechanical model?

Using modern digital computers we can play Super Mario. Though Mario is after all a program and runs on the processor. The graphics rendering algorithms are algorithms after all. And some texts says that the notion of algorithm comes from the concept of Turing Machine. But a TM cannot possibly produce audio/video.

Then why some people believe that TM is equivalent to modern digital computers ? Or could we somehow use a multi dimensional TM and use each cell as a pixel to produce a picture.... I doubt?

I have seen the question here but it does not answer my query.

Modern computers are not more powerful than a TM.

The meaning/definition of "mechanical means" is not "a TM"; "mechanical means" refers to any step-by-step process that can be carried out in the real, physical world. For instance, it would include mechnical devices, electronic devices, a human following a procedure "mechnically", and so on.

Not the answer you're looking for? Browse other questions tagged turing-machines computation-models church-turing-thesis or ask your own question.