Is an integer variable constant or logarithmic space?

My lecturer says that a variable takes up one memory position in RAM. This is the slide in question: 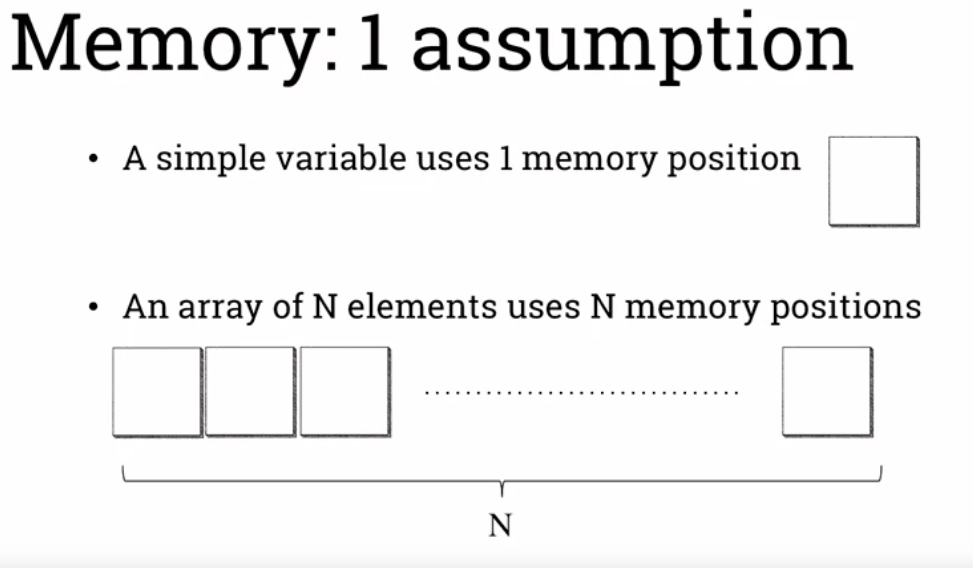 But CLRS (Introduction to Algorithms by Cormen, end of page 23) says an integer is represented by $c\ lg\ n$.

Are both statements true? How can that be?

The random-access machine is a common model of computation, which is the model of choice when analyzing algorithms. In this model, memory consists of words of length $\Theta(\log n)$ bits, where $n$ is the length of the input (in bits). Therefore both your lecturer and CLRS are right.

In practical computer machines (aka, real-world computers) variables can be considered to be stored in "one" memory position, since the variable's size is fixed beforehand. For example, int is usually 32 bit long, and hence we can say it takes up "one" memory position of length 32 bits.

However, in the theoretical terms, integers do not have to be bounded between some arbitrary values we defined beforehand. That is, in the practical world integer with size 32 bit cannot store a value larger than $2^{32}-1$, but in the theoretical model it can. The caveat here, is that since we do not restrict the value of a variable, we need to actually consider how much memory it eats up. To save the number $n$ we need $\log(n)$ bits, hence what the book says is true, in the theoretical model.

In mathematics, an integer can get arbitrarily big. However, the bigger a number, the more digits are needed to write it down.

A memory cell in a computer has finite capacity. Therefore, a single cell can only store integers up to a certain size.

A single variable, stored in a single memory cell, can therefore hold integers only up to a certain size. That's why most programming languages limit the size of their integral data types. For instance, in Java, a variable of type int can hold integers up to $2^{31}$ (about 2 billion).

That is, the word "integer" means something slightly different in mathematics and programming. CLRS was talking about the mathematical integers, while your professor was talking about the integral data types provided by a computer. The former may get arbitrarily big, and require many memory cells, while the latter fit within a cell by definition.

Integers take up logarithmic space but this is usually of little interest during algorithmic analysis of real-world problems.

Here are things to keep in mind:

The $n$ often used in Big-O notation conventionally refers to the number of data items, rather than the possible range of those items. For example, if you are sorting 50000 integers and they are all smaller than 2 billion, that's $n=50000$ and $m=2000000000$. The input data will consume $O(n\,\text{log}\,m$) space. But often this will just be expressed as $O(n)$ because in the real world it's rarely important to consider mind-bogglingly-huge integers which is what it would take to make a serious difference here.

2. Most algorithms are comparably affected by datum size

One of the main reasons to perform asymptotic analysis is to compare two algorithms which solve the same problem. Most important classes of algorithm, such as sorting and searching and graph algorithms (e.g. shortest-path etc.) and optimisation algorithms, generally have the same asymptotic complexity whether they are operating on say 32 or 64 bits.

If we consider things like very large prime number testing, the size of the primes can be crucial to accurately characterise an algorithm's behaviour.

Also, in abstract or theoretical environments it is necessary to be more rigorous about such things. Turing Machines typically have a fairly small alphabet (i.e. "variables" can hold a quite small range of values) so it is impossible to hand-wave away the size of an int.

4. Many languages use variable-sized integers by default

In Python, Ruby, Haskell and Raku, an integer is automatically allocated as much memory as it needs. You can multiply 999999999 * 999999999 * 999999999 * 999999999 in any of these languages and get a 100% precise result—they are not floating-point numbers. So if you create an array of really big integers you will see logarithmic memory usage. (CPU operations will also increase if the numbers are larger!)

5. In practice, integer size (or numerical precision generally) is usually about machine selection, not algorithm selection.

If you are trying to process 20-digit numbers on an 8-bit computer, you are using the wrong machine. You will experience a blowout of both RAM and CPU operations. The solution is not a change of algorithm but a change of hardware.

6. Sparse integers can usually be collapsed with e.g. hashing

Algorithms that require several copies of very large integers to be stored can be modified to save memory by hashing the datum or using indices/pointers. This step does not increase big-O performance complexity (although it does slow things down.) Figuring out the right trade-off to make is not really something that can be captured in a simple big-O formula.

When you want to store something bigger in a variable, you store a reference to the value in the original memory position. This reference can be used to find a sequence of memory positions that contain the actual value.

These extra memory positions do not belong to the variable, but to the value stored.

Not the answer you're looking for? Browse other questions tagged asymptotics or ask your own question.