Rearrange an array using swap with 0

This is a Google interview question. I got it from a website.

You have two arrays source and target, containing two permutations of the numbers [0..n-1]. You would like to rearrange source so that it equals to target. The only allowed operations is “swap a number with 0”. Find the minimum number of swaps?

My attempt on problem: If we consider arrays as strings we could use edit distance to convert source to target if other edit distance operations like insert,delete,replace etc are allowed but here only allowed operation is swapping.

You can build a directed graph with $n$ nodes and an edge from node $n_i$ to node $n_j$ if $n_i = j$, i.e. the target position of $n_i$ is $j$ (skip nodes that are already in the correct position). The resulting graph contains one or more distinct cycles.

You can arrange the cycle containing the zero following the arcs in the reverse direction, then "jump" to another cycle and arrange it; the "entry point" doesn't matter. 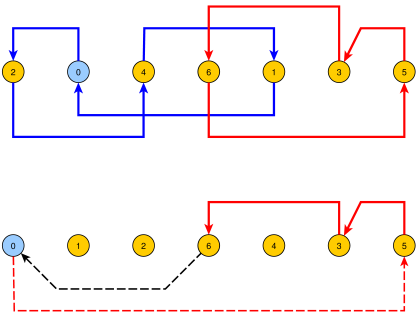 In order to minimize the number of swaps, each time the 0 is not in its correct place you can take advantage of its current position and swap it with the number that should go there.

@Vor's solution is awesome! Here is a Java implementation for that:

Not the answer you're looking for? Browse other questions tagged algorithms sorting permutations or ask your own question.

9
Expressing an arbitrary permutation as a sequence of (insert, move, delete) operations
1
String similarity problem
2
is this NPC Prob? Minimum count of distinct values at all matrix columns provided only in-row swap operation
4
Is there a polynomial algorithm for optimal sorting on trees?
1
Can the KenKen puzzle be solved using the same ideas as for Sudoku?
0
Area preserving distance optimization