I am preparing for my exam in formal languages and I need some help with one question from one old exam. 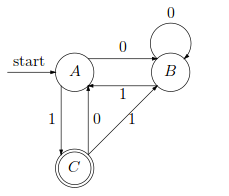 I know that the number of equivalence classes of some regular language L, is the number of states of the minimal DFA for that language.

But how do I give a DFA for one of the equivalence classes ?

An elaborate hint: recall that the proof of the Myhill-Nerode theorem works (in one direction) by constructing a DFA for a language, given its equivalence classes.

Observe that you may end up with a DFA that is not minimal for the equivalence class.

Not the answer you're looking for? Browse other questions tagged formal-languages finite-automata or ask your own question.