what are meta variables in this static analysis book's explanation about types?

At page 21 of this book: https://cs.au.dk/~amoeller/spa/spa.pdf I found this: 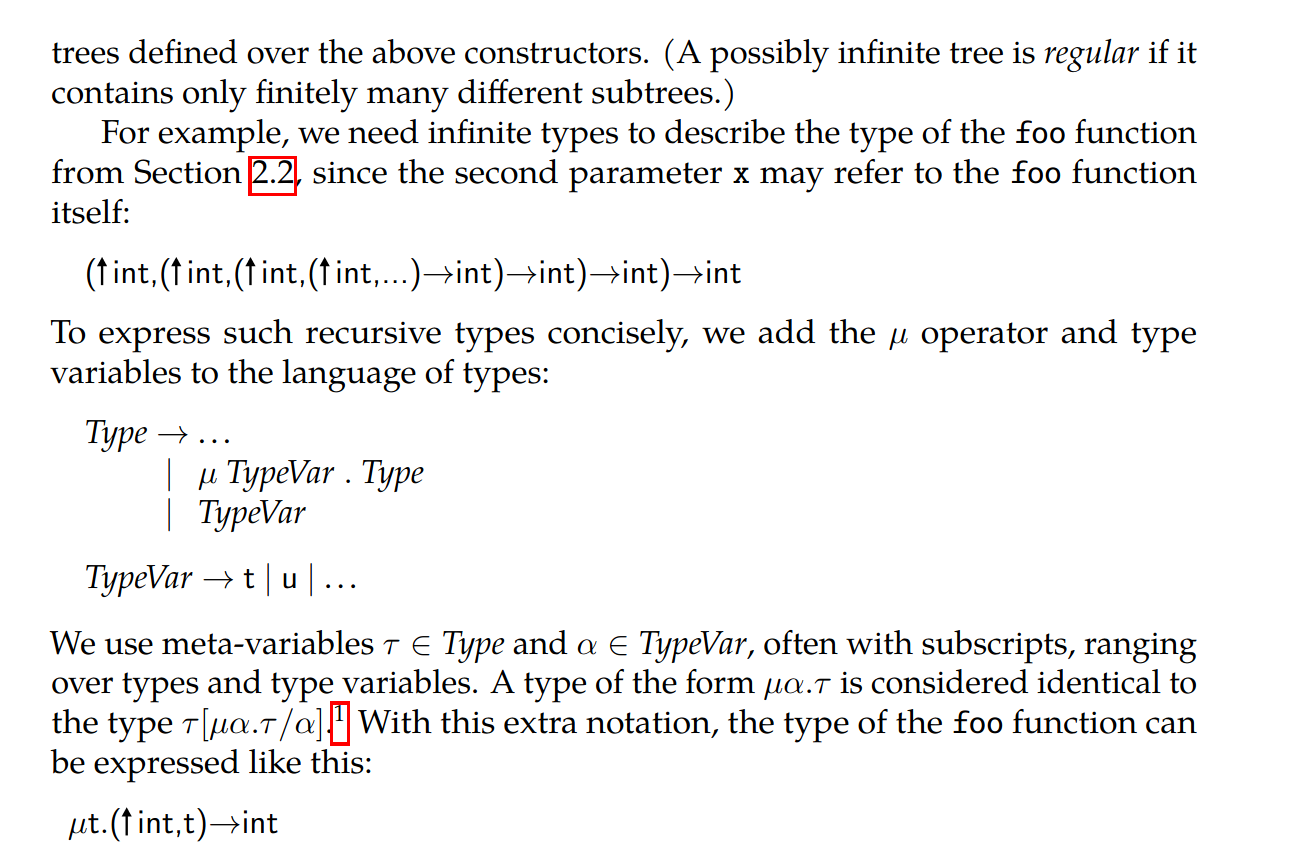 I started reading everything and understanding it pretty well, until this.

It's defining the possible types of a language. I'm very confused about what theta and alpha mean. What are those meta-variables? What is ua.t and t[ua.t/a]?

Could someone give me some context? I'm not into computer science, this may be something specific that I have never seen before. I'm from a math background.

type-theory type-checking static-analysis
Share
Improve this question
asked May 21 '21 at 5:26

A metavariable is a variable that denotes some hypothetical chunk of a program. This distinction is important in the theory of programming languages, where we need to distinguish variables representing program fragments from the variables contained in those programs.

The terminology, I think, comes from logic: if you're defining a logic, you need to define it in some language that's distinct from the thing you're defining. This is the "meta-language", and the variables it uses are metavariables. The history of formal logic and programming languages are deeply intertwined via the Curry-Howard correspondence, so the terminology carried over.

The above sentence does not belong to the STLC language. It belongs to a meta-language: the language that I used (english) to express a property about STLC. The $A$ in the above sentence is a meta-variable that ranges over the set of types of STLC.

The distinction here is perhaps clearer, because we know that STLC has no type variables. But if you want to express properties about a language that has type variables, you may need to explicitly clarify what are variables of the object language (the calculus/language you talk about) and what are meta-variables (variables that belong in the language you use to express properties about the object language).

The notation $\mu a.\tau$ is a type that is similar to System F's polymorphic type $\forall a.\tau$. They both bind the type variable $\alpha$ in $\tau$. The difference is in the semantics. As the text states,

and this allows us to introduce recursive types in our object-language (which is not the case about $\forall a.\tau$).

Not the answer you're looking for? Browse other questions tagged type-theory type-checking static-analysis or ask your own question.

6
type theory notation troubles
12
Reducing products in HoTT to church/scott encodings
6
What are the rules for positive recursive types in dependent type theory?
5
What does $ \forall \alpha_1, \dots , \alpha_n . \tau $ mean formally as a type?
1
What is the difference between $ \alpha \to \alpha $ vs $ \forall \alpha. \alpha \to \alpha$?
2
Are type variables really only used in mathematical conversation about types?
2
Do dynamic/static languages associate types or classes to values or variables?
4
Why do we need a separate notation for П-types?