How does asynchronous operations save time in I/O

I'm reading a book CLR via C# which says how Windows does asynchronous I/O: 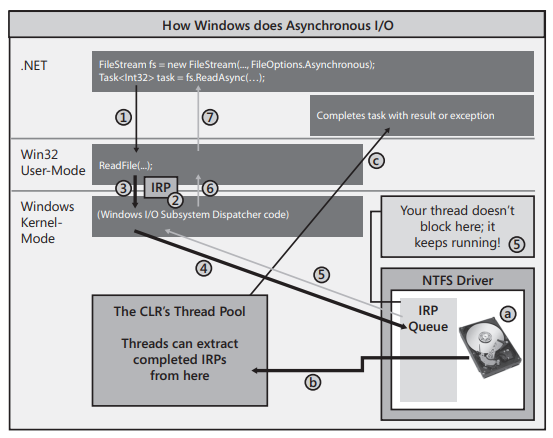 To read data from the file, ReadAsync internally allocates a Task object to represent the pending completion of the read operation. Then, ReadAsync calls Win32's ReadFile function (#1). ReadFile allocates its IRP (I/O Request Packet) and then passes it down to the Windows kernel (#3). Windows adds the IRP to the hard disk drive’s IRP queue (#4), but now, instead of blocking your thread, your thread is allowed to return to your code; your thread immediately returns from its call to ReadAsync (#5, #6, and #7). Now, of course, the IRP has not necessarily been processed yet, so you cannot have code after ReadAsync that attempts to access the bytes in the passed-in Byte[]. Using the task object, you can call ContinueWith to register a callback method that should execute when the task completes and then process the data in this callback method. Or, alternatively, you can use C#'s asynchronous function feature to simplify your code by allowing you to write it sequentially.

The author also describes a scenario of how asynchronous operations save time in I/O:

so how can how async operations can reduce the time from 50 seconds to 5 seconds? Unless the network adapter driver itself is a small powerful computer that has multiple CPUs that can serve requests concurrently, but this is obviously not true, drivers like network adapter drivers are cheap devices, it can't be having expensive components like CPUs?

programming-languages computer-networks
Share
Improve this question
edited May 26 at 0:31

Issuing the ten requests in parallel is unlikely to give you a tenfold speedup, but will usually give you some speedup. It depends on where the bottleneck is. If the images are 5 MB each and your Ethernet/WiFi connection can only transfer data at 1 MB/s, then your network card will essentially be tied up for 5 seconds per image, and issuing the requests in parallel probably won't help. If the images are 5 kB each and you have a gigabit fiber Internet connection, and the 5-second delay is due to the servers being very slow to respond, then your network card will be idle almost all of the time, and you may actually get all of the images back in 5 seconds total if you issue the requests in parallel.

The network card only sends and receives small isolated data packets, typically of about 1500 bytes. It doesn't understand the concept of a TCP or HTTP connection. When it's not sending or receiving packets related to one connection, it can send or receive packets related to another, even if the first connection is still open.

The book is wrong to assume that the 10 requests are perfectly parallelizable; usually that isn't the case. Also, the parallelism it's talking about has nothing to do with asynchronous I/O as such. You'd get the same speedup by starting 10 threads and issuing a blocking I/O call in each one. That might be a bit slower because of thread-creation overhead, but might also be faster because it uses more CPU cores if you have them. For the highest performance you have to create one thread per CPU core and use asynchronous I/O in all of them. NT has built-in support for that model through I/O completion ports.

Not the answer you're looking for? Browse other questions tagged programming-languages computer-networks or ask your own question.

6
Algorithm for Dynamic Client Side Throttling
0
Why does packet delivery time only count transmission time once?
3
How does a computer "wait" time?
3
Why are both caller-save registers and callee save registers needed?
0
Is there any guarantee in asynchronous systems?
0
How to reconcile the different definitions of asynchrony?
0
How to do asynchronous programming with only global variables?