In Types and Programming Language's constraint typing rules (Figure 22-1), is it possible for any part of the typing derivation to contain free type variables that aren’t part of the fresh variables? Because the typing rules are based on the simply-typed lambda calculus with an infinite number of base types, a naïve reading would allow for $\Gamma$, $t$, or $T$ to contain type variables not mentioned in $\chi$. However, given that TAPL hasn't introduced polymorphism yet, I wonder if this case should implicitly be considered "invalid."

Figure 22-1 from TAPL, for reference: 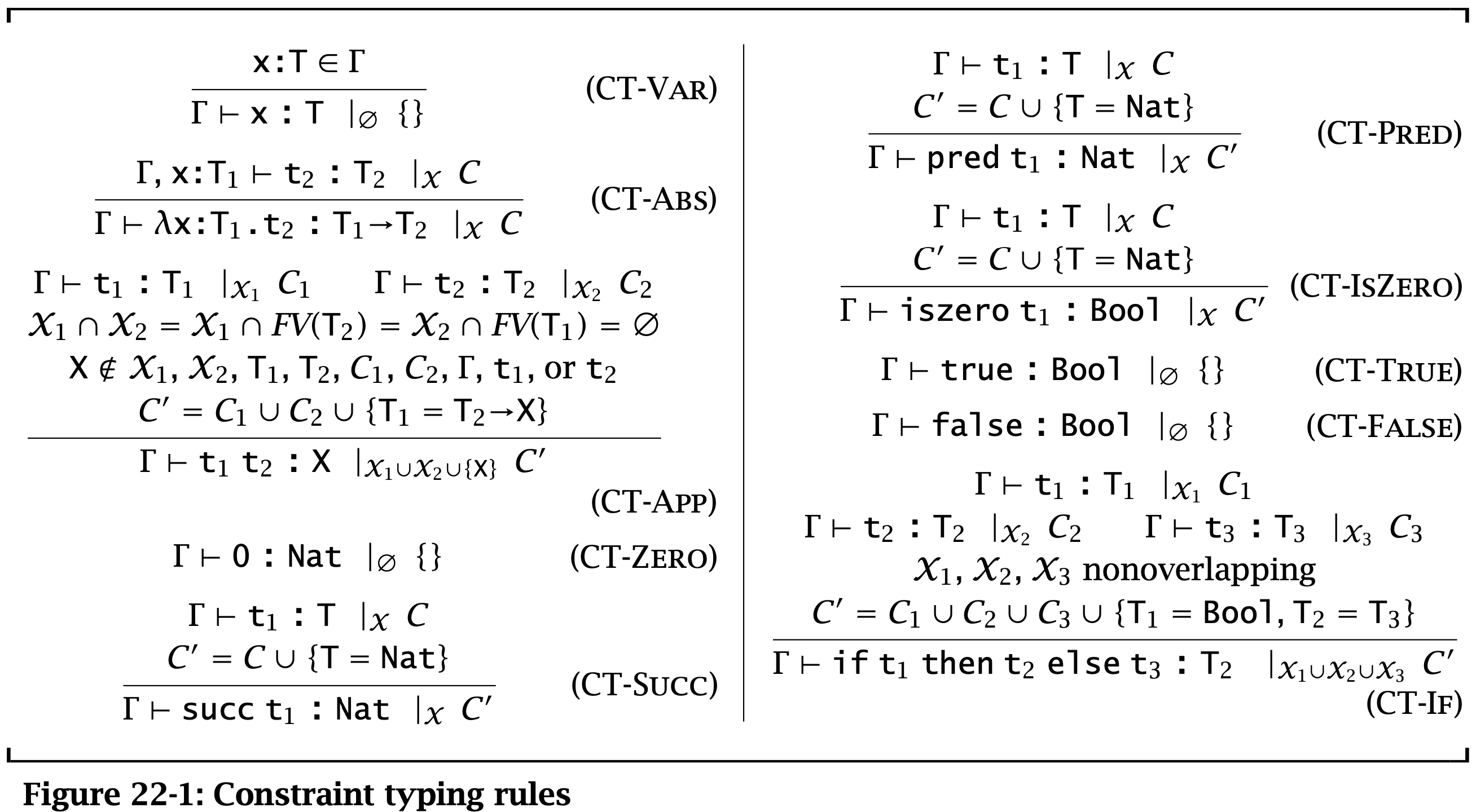 EDIT: This question has been significantly edited in response to @frabala's answer, which made me realize that I hadn't been very clear initially. Hopefully it makes more sense now: See the edits and comments on @frabala's answer for a targeted answer to my question as currently written.

Not sure whether I completely understand the question, but here is my attempt:

a naïve reading would allow for Γ, t, or T to contain type variables not mentioned in χ.

$\Gamma$, $t$ and $T$ may contain type variables not mentioned in $\mathcal{X}$. The set $\mathcal{X}$ contains only unification variables. That is, fresh variables generated by the typing process (in particular, by rule CT-App, where it is explicitly stated that the new unification variable $X$ should not appear in $\Gamma$, $t$, $T$, etc). Try exercise 22.3.3. In the process of building a derivation for the judgment shown there, $\Gamma$ will end-up containing the type variables $X$, $Y$ and $Z$ (which initially are part of the term $t$) and those variables will not belong in $\mathcal{X}$ at any point of the derivation.

I think my question is actually if any of Γ, t, or T can have free type variables (i.e. that haven't been introduced by the type-inference rules).

$\Gamma$ can have type variables not introduced by the rules. For example, the term $(\lambda y : B.y)$ of the polymorphic type $B \to B$ is typable under some environment like $\Gamma = x:A$ (and to avoid ambiguity, one needs to make sure that the identifiers $x$ and $y$ are distinct). This would be another way to encode constants in a language. For example, instead of having the rule CT-Zero, we could always type a term under the unvironment $\Gamma_0 = 0 : \mathrm{Nat}$.

I still don't fully understand the question. What do you mean by "standalone" derivations? Anyway, there is something I'd like to add:

First, note that the typing rules are such that every new unification variable is recorded in $\mathcal{X}$.

This does not mean that the term application $t_1\, t_2$ is not typable. Instead, this condition forces you to rename your unification variables accordingly, so that overlaps between the names of variables contained in $\mathcal{X}_1$ and $\mathcal{X}_2$ do not occur.

Maybe now I do understand the question:

if there are any implicit meta-constraints that disallow "standalone" type derivations from containing free type variables.

First, let's clarify that all type variables appear free, because the language has no type abstraction in its syntax. There are no $\Lambda$ or $\forall$ binders as those in System F. Now, every type variable $P$ that appears in $\Gamma$, $T$ or $\mathcal{C}$ has one and only one of the following two origins: either a) $P$ originates from the term $t$ (in the type of a $\lambda$-binder), and thus was given by the programmer, or b) $P$ is a freshly generated type variable. The set $\mathcal{X}$ keeps track of these type variables.

So given that we start our typing process with an empty $\Gamma$, all type variables that appear in a derivation are free and necessarily have one of these two origins. There can be no type variables of some other origin and this is not an implicit constraint. It is enforced by the typing rules. You can try proving the following:

This statement also takes into account the case where we start the typing process with a non-empty $\Gamma$. I believe the proof can work by induction on the typing judgment.

Not the answer you're looking for? Browse other questions tagged type-theory type-inference or ask your own question.

11
Define a list using only the Hindley-Milner type system
2
Typing by value
2
Induction on typing derivation in refinement types system
4
Typing rule for binding groups
0
Find typing derivation of STLC term with reference types
0
How does this allow list operations to be applied to lists with elements of any type?
0
What are the difference and relation between type checking and type reconstruction?