Shortest path in a grid with turnstile

This question is a simplification of the one about finding the shortest path in a grid with turnstile and waypoints. Since this simplification has dramatic consequences, I think it deserve its own question and answer.

Here's a reminder of how the turnstile tiles work.

Here's an example before and after exiting a turnstile tile:

How do we find the shortest path from A to B in a grid maze with turnstiles?

Update: I'm accepting my own answer for now. If anyone want to make an answer with the full proof, I'll glady accept it.

Short answer: Encode the maze as a directed graph and apply your usual Dijkstra or A*, ignoring the state you leave the turnstiles in. The turnstiles can be encoded by having arcs both ways on the sides without bar, and only the out going arc for the sides with bars.

For instance, this turnstile:

Can be turned into this graph portion: 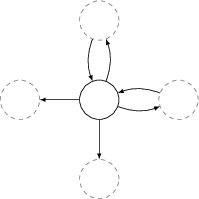 Of course, don't connect the center node to its neighbor if it's not reachable (like a wall).

The essential property that make it work is that shortest paths never include cycles, even with those turnstiles.

Idea of the proof:

But this situation cannot exist because unlocking the way between $N_1$ and $N_2$ requires visiting the blocking turnstile(s). Therefore there's no need to revisit $N_1$ to access $N_2$.

Then it follows that:

Not the answer you're looking for? Browse other questions tagged shortest-path or ask your own question.

7
Shortest walk in a grid with turnstiles and waypoint