In the report "Shared Memory Consistency Models: A Tutorial" (https://www.hpl.hp.com/techreports/Compaq-DEC/WRL-95-7.pdf), the authors explain the difference between IBM370, Total Store Ordering, and Processor Consistency via Figure 10 (shown below).

I do not understand why the results for (a) are not possible with IBM370. The report mentions that

these models ... allow a read to be reordered with respect to previous writes from the same processor

(with different addresses). The IBM370 model

prohibits a read from returning the value of a write before the write is made visible to all processors.

I think this means that for the program in (a), P1's read on A must wait for P1's earlier write to A to become visible to P2 before returning. I do not understand how this prevents P1's write to register2 to be reordered to execute before P1's write to Flag1 (which makes the result possible), as described by Figure 10's caption. 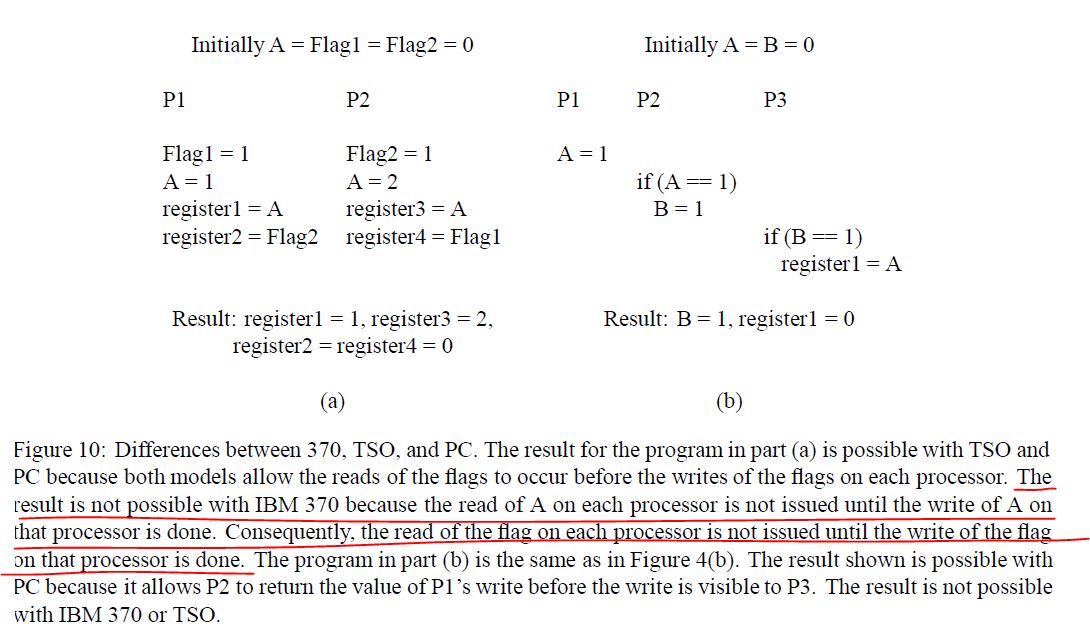 Let have a look at this simple example.

Yes, because the load of r1 is a load which can be satisfied from the store buffer and the load of r2 from the cache. So they can be reordered in the global memory order. And the same goes for r3/r4.

Lets go back to the example (a). For TSO this would be a possible memory order that explains the results.

The trick is with the 2 loads at the end of P1/P2. They have been ordered to the beginning of the memory order since they have a preceding loads that can be satisfied by the store buffer.

With IBM 370 load/load reordering isn't possible. So it is impossible to find a memory order that will be consistent with IBM 370.

PS: I'm no authority, so best to recheck my answer :) I'm also studying this part myself.

Not the answer you're looking for? Browse other questions tagged computer-architecture shared-memory or ask your own question.