How to arrange a sub-array for Quick sorting algorithm?

steps : 1- find the pivot point from array like first element . 2- partiotioning the array so that elements are smaller than pivot point are in the left side and ones are bigger in the right side . 3- sorting both sub arrays (recursion)

Question : i know all of the steps but i don't know how to sorting sub arrays in step 3 . i can't find any example that explains this ending part . 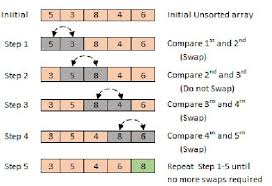 if you look at this you see that both sub arrays are unsorted and we should complete steps with recursion method to solve this and this is my question .

but can you explian this for me ?

The conceptually simplest way is to simply use the same algorithm recursively to sort the sub arrays; hence why it's labeled as recursion. As long as the base cases for very small arrays are correctly defined, this will yield a correct result.

As an example, let's Quicksort some alphabet, using first symbol as pivot:

Then, we recursively sort DEBAC and HG. I'll demonstrate with the former:

thereby getting the desired result:

In practice, Quicksort implementations are often modified to sort small enough (sub-)arrays with Insertion Sort, which usually exhibits superior performance for sufficiently small input arrays. Arrays and sub-arrays larger than this are sorted, as above, usually by recursively applying the same algorithm.

Not the answer you're looking for? Browse other questions tagged quicksort or ask your own question.

2
Why %RSD of execution times, while sorting hundreds of arrays, is lower for larger arrays of random integers?
3
How does Hoare's quicksort work, even if the final position of the pivot after partition() is not what its position is in the sorted array?
1
Number of calls with length 2 array in quick-sort
1
When average , worst and best case time complexity happens in quick sort?
1
Quicksort where element comparison outcome is random. Probability of element being in a certain position
1
Quick Sort Equal to or Less Than
1
Is there a way to find the correct element in the array for the given index x?