Ok, so I'm having bit of an issue understanding nearest neighbour search with delaunay triangulation.

In particular, how do I re-triangulate my delaunay triangulations once I introduced holes?

But I should probabl provide a bit of context:

(source: university script, not sure I should/am allowed to link to it, so please just take my word for it that this is how it's explained therein. [I'm skipping most of the proofs here because they aren't relevant to the question I'm having.])

Theorem 10.17 Given a triangulation T for a set P ŌŖé R2 of n points, one can build in O(n) time an O(n) size data structure that allows for any query point q Ōłł conv(P) to find in O(log n) time a triangle from T containing q. The data structure we will employ is known as KirkpatrickŌĆÖs hierarchy.

We will now the develop the data structure for point location in a triangulation, as described in Theorem 10.17.

The main idea is to construct a hierarchy T0,. . . ,Th of triangulations, such that

This search is efficient under the following conditions.

(C1) Every triangle from Ti intersects only few (>= c) triangles from TiŌłÆ1. (These will then be connected via the data structure.)

Ok, I get the idea behind it, I'm not certain about the actual implementation. Let's read on:

Our working plan is to obtain Ti from TiŌłÆ1 by removing several independent (pairwise non-adjacent) vertices and re-triangulating. These vertices should

a) have small degree (otherwise the degree within the hierarchy gets too large, that is, we need to test too many triangles on the next level) and

b) be many (otherwise the height h of the hierarchy gets too large).

Lemma 10.22 In every triangulation of n points in R2 there exists an independent set of at least Ōīłn/18Ōīē vertices of maximum degree 8. Moreover, such a set can be found in O(n) time

Construct an independent set U in T as follows (greedily): As long as W != Ōłģ, add an arbitrary vertex v Ōłł W to U and remove v and all its neighbors from W.

Obviously U is independent and all vertices in U have degree at most 8.

Obtain Ti from TiŌłÆ1 by removing an independent set U as in Lemma 10.22 and re-triangulating the resulting holes.

Alright, let's try this out. Let's say we have a voronoi diagram like so: 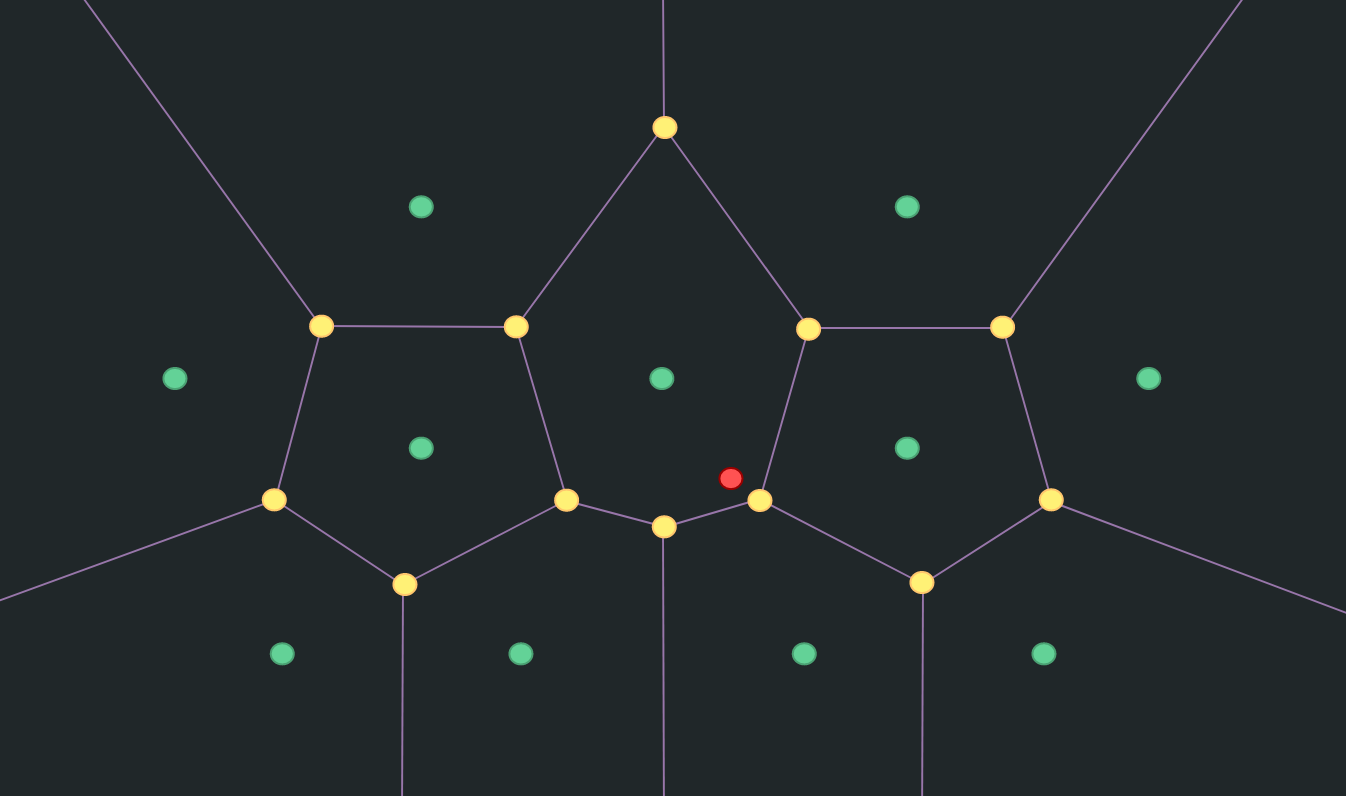 where green are our sites and red is our query point.

T0 is our delaunay triangulation 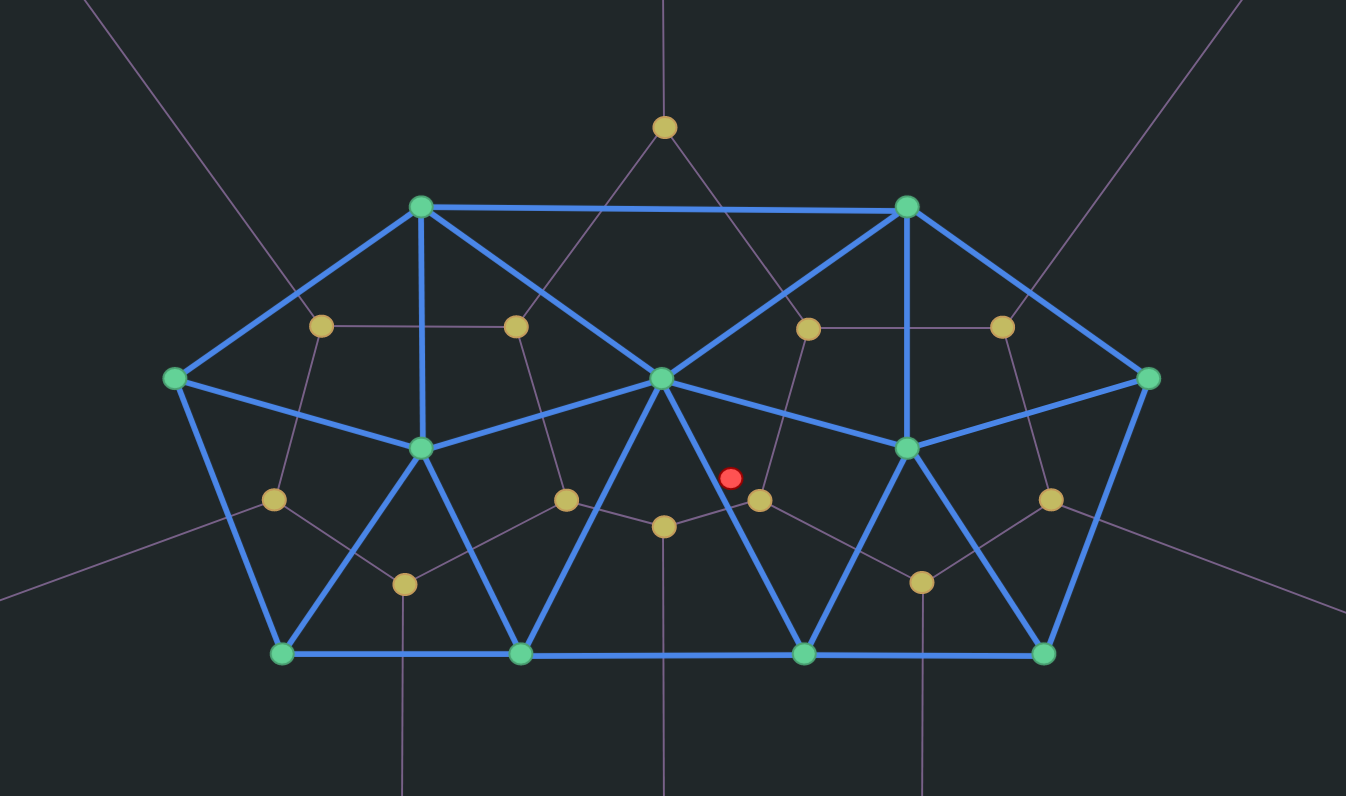 Let's construct our first set of independent vertices U0. As all vertices have degree < 8, we can pick any we want, but we know from above that

a) have small degree (otherwise the degree within the hierarchy gets too large, that is, we need to test too many triangles on the next level) and

b) be many (otherwise the height h of the hierarchy gets too large).

So let's start with the leftmost vertex, which has degree 3, and take it from there: 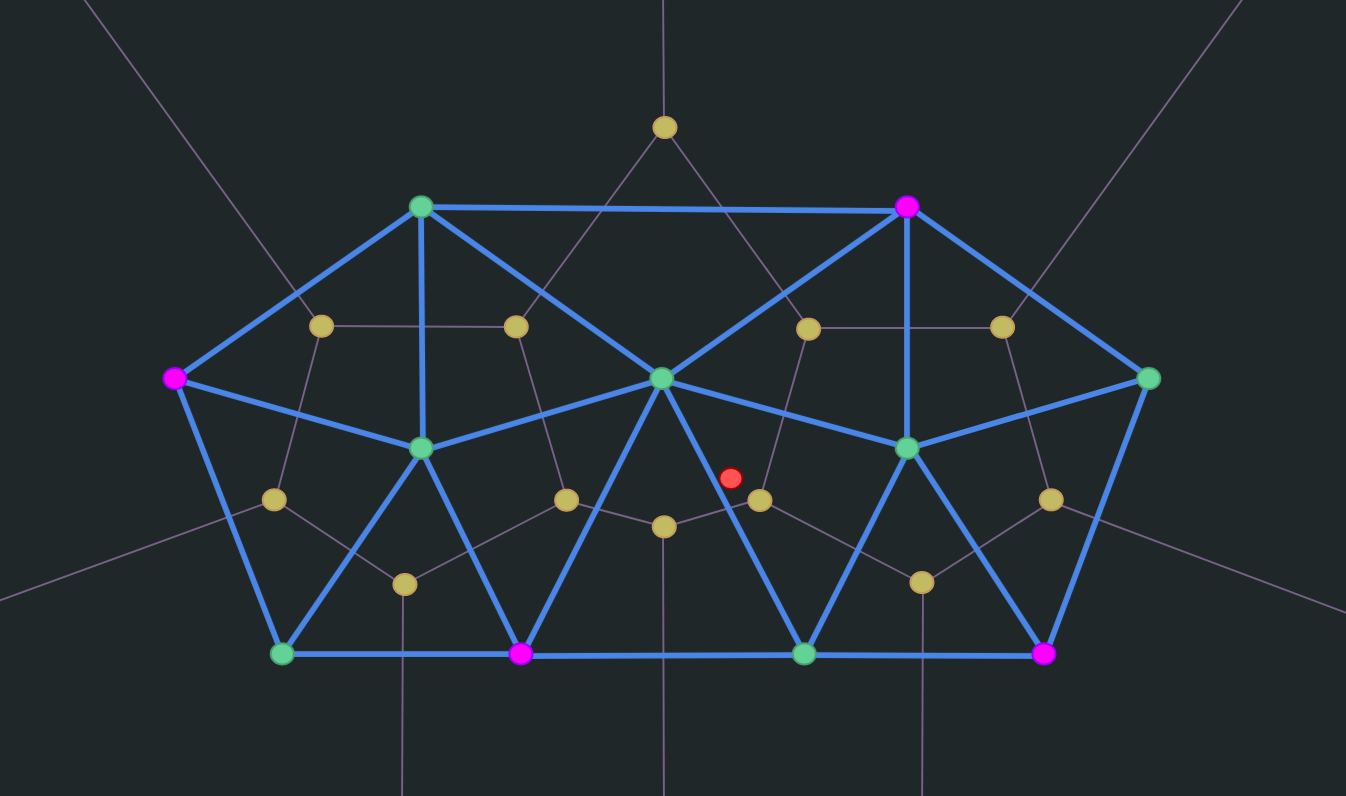 Remove these vertices and their edges: 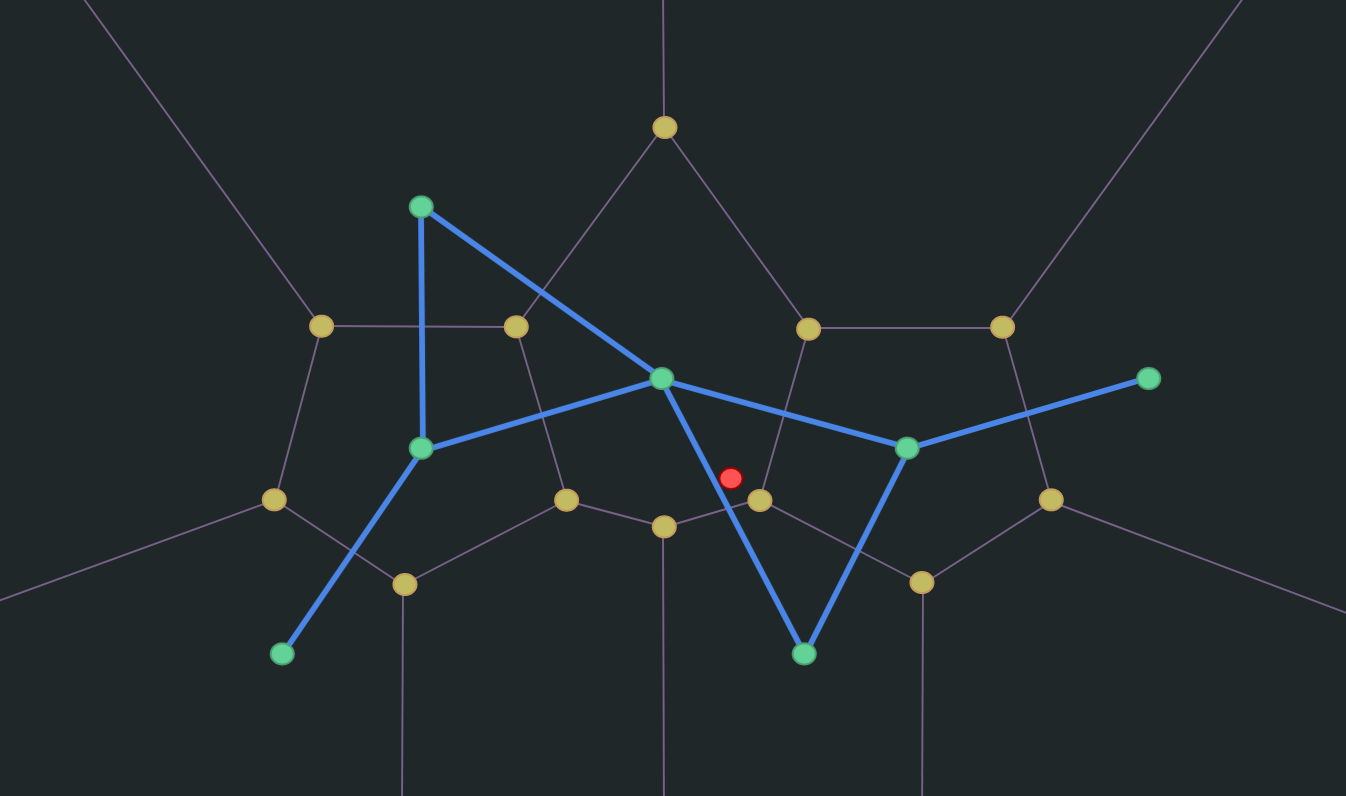 And now re-triangulate to obtain T1 ... how?

I'm assuming T1 should end up looking like this ... 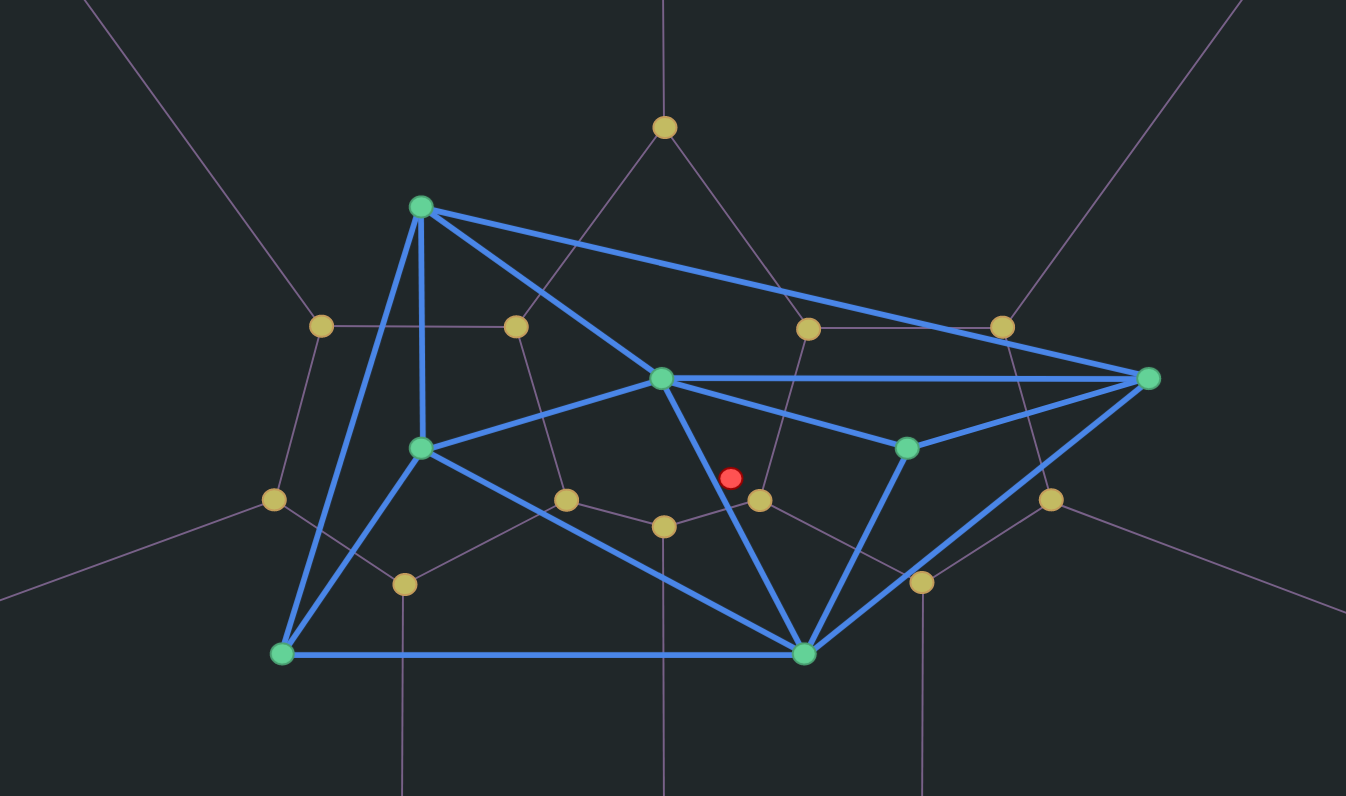 But that got me thinking ...

Ultimately, the search algorithm given is

But if in the beginning, I would have set my red query point over here... 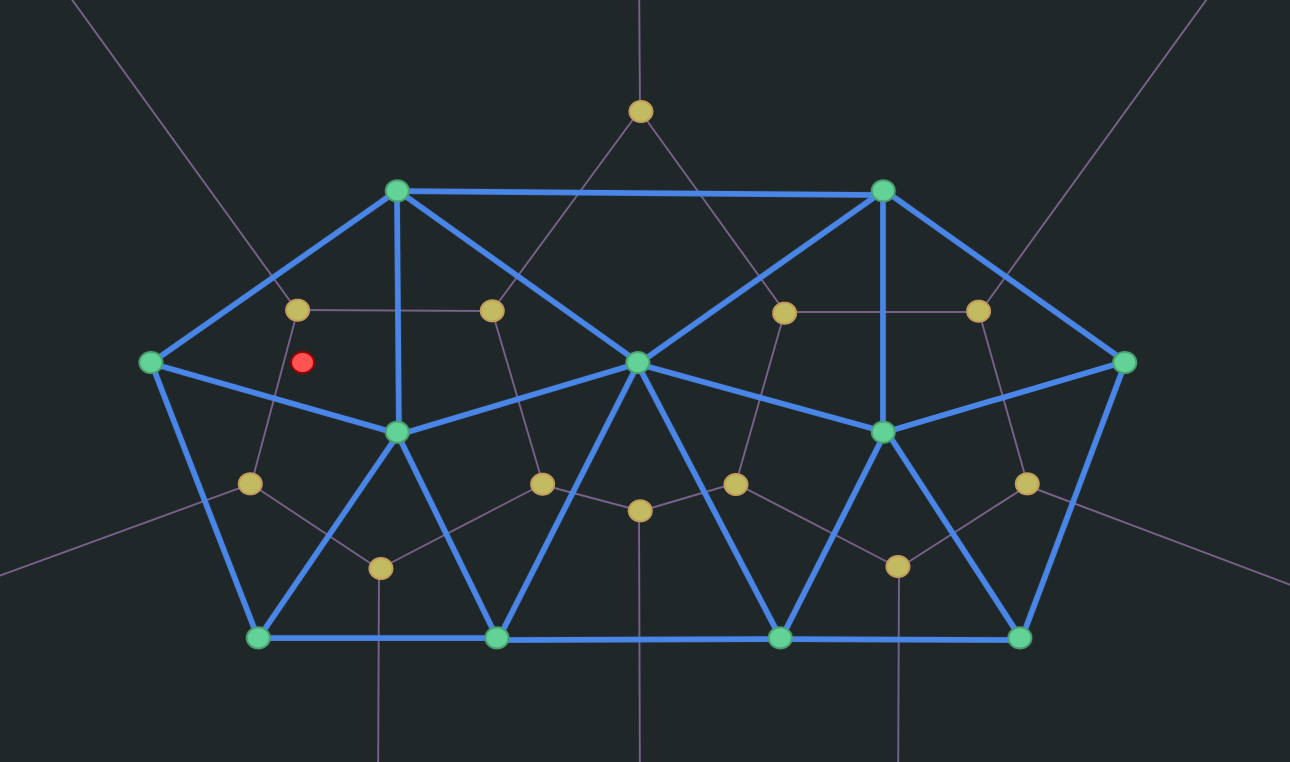 That would still be within the convex hull of T0 (our delaunay triangulation), BUT we'd have no way to find a triangle in T1 that contains it. 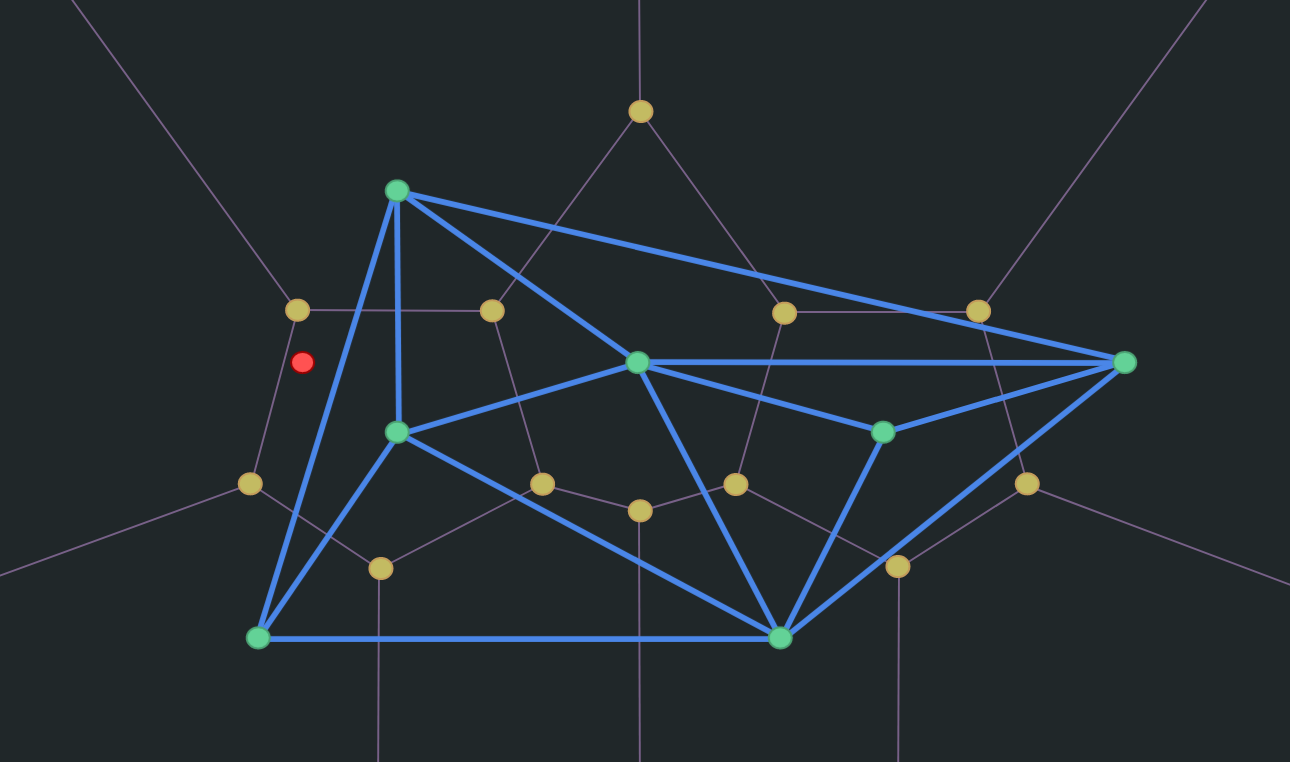 I'd appreciate some help in understanding how Kirkpatrick's Hierarchy is constructed.

To make our life easier, we always assume that the convex hull of the triangulation consists of three points. If it is not, just add three points far away and triangulate. Then, the important thing is that those points that we remove are always internal points, never on this outerface that is a triangle. The reason why we want them to be independent, is because we want the following property: after removing the points, we obtain a triangulation with holes, and each hole is star shaped (there exists a point that sees all the edges of the hole). So no point can be on the boundary, and no two points removed are allowed to be adjacent. You still need to argue why you can have that many points.

This is why the convex hull of the triangulations is always the same, and we don't have the issue you mention

Not the answer you're looking for? Browse other questions tagged data-structures computational-geometry nearest-neighbour voronoi-diagrams or ask your own question.

17
Brute force Delaunay triangulation algorithm complexity
4
delaunay sweep circle initialization
9
Unique triangulation duals of simple polygons
2
Tight bound on the number of intersections between a line and a triangulation
2
Delaunay to Voronoi ... and back?