I have a sorted (by key) sequence of key value pairs:

And I have to produce a sequence of tuples like this:

Where the second element of the tuple is a sequence with the values corresponding to the key.

I am working on haskell, under the hood I have a Seq that is a Vector, but a pseudocode solution is OK.

Where lengthA, nthS are $O(1)$ and appendS is linear to the size of both sequences.

My problem is that the solution has to have work in $O(n)$ and parallel cost (S) $O(lg n)$. How could I create an algorithm that runs on that cost with these operations: 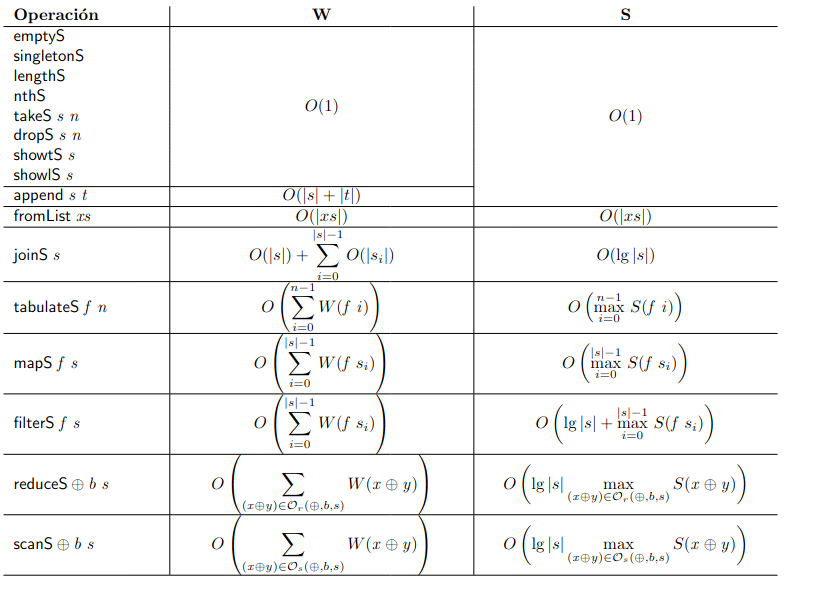 Thank you very much.

Since the input is sorted, the elements are essentially already grouped, you just need to find the "boundaries" between the groups. By boundary, I mean the index where a run of the same key starts.

The boundary indices tell you how big each group is (by subtracting adjacent boundaries). Now, you just have to construct the output groups. For each group, do a tabulate, where you offset the index by the boundary. Specifically, the $i$th element of the $j$th group is input[boundary[j] + i].

In total, that's $O(n)$ work for the filter and maps/tabulates. The parallel time is dominated by the filter, costing $O(\log n)$.

Not the answer you're looking for? Browse other questions tagged algorithms parallel-computing haskell or ask your own question.

2
Why does the total credit associated with a data structure must be nonnegative at all times for the accounting method?
5
What defines a subproblem?
1
Conway's Game Of Life Problem Parallel (OpenMP)
1
Has the problem of finding the most profitable transactions given a set of discrete time series been well-studied?
0
Analyze time series data to get min max over past period of time
3
Compute highest-scoring segmentation
0
Proving existence of an optimal substructure for the DP problem "Sherlock and Cost" from HackerRank