Filling in the image by the brain

The Cones and rods are not evenly or precisely sensitized on the retina by incoming light. Because of this, the image is formed with distortions. But the brain corrects these deformations through a calculation that tries to form a uniform image, which is the end product we see. I would like to know if there is any algorithm that has already proposed to model how this probabilistic correction that the brain makes.

Does anyone know anything about this? It would be amazing

The brain works as a hierarchical distributed network of networks (hence heuristics).
We attach meaning and prototype of objects as abstract concept.

But this is not the whole story, you have to know three additional things to make a connection.
Various networks or blending functions are individual on person basis. Everything starts from the first day of life.
We try our senses, here touch and vision. We see 3D, but to do that, we would require 3 eyes. So depth of image is also created in kind of brains distributed DNN using additional info, like shade or object recognition (cognitive function tells us that e.g. car has depth, so this part is purely cognitive).

The distribution of rods and cones is not uniform and not the same among people, but yet, we see the same things?
This is not entirely true, people who never seen buildings (experiment on native tribes) when go up, to the roof, they do not feel anxiety looking down.
People who never seem triangle are immune to optical illusion, 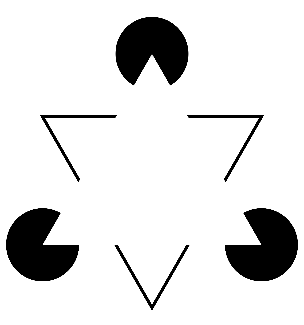 They see three bitten apples and pictogram of three birds.

Getting back, people who share knowledge, say starting from primary school, will see it.

The missing part: how people can see the same things with the different distribution of rodes and cones?
First, they see small differences, but are able to infer it. Second, crucial point, when we learn to use sight, we also use touch as training set. Being able to touch something and remember shape, calibrates perception. Based on other senses and continuous training (brain consolidates every new piece of information all the time), the distribution of sensors doesn't matter, as we check out the world and surroundings for something like first five years, and then start to infer and learn abstract ideas, with calibrated sight.

This is solely based on senses and experience.

This is the same as with neural network classifier that gets different modified versions of the same image, as far as it is used consistently the same convolution function, the results won't change much. People change this convolution function in the first years of life after touching enough objects and byproduct is depth sensing.

Not the answer you're looking for? Browse other questions tagged algorithms reference-request or ask your own question.

5
Where can a student learn image processing?
1
Filling a matrix with the sum of conditional values
3
Algorithm - Wine Bottle Filling
0
Online Set Filling
1
Online set filling with redistributions
0
textbook on the human brain for computer scientists/machine learning professionals?
2
Does this progressive image compression exists?
2
A greedy algorithm for the bottle filling problem
3
Human brain vs computer
2
Image segmentation of a high resolution 2D binary image into clusters, threads and points