I am learning computer network, and confused by the queuing delay. In my textbook, it says that when La/R approaches 1, and with random inter-arrival times, then the average queuing delay is closer to infite. Here, R is the transmission rate, a is in units of packets/sec and all packets have L bits data.

Here is what my textbook says:

Typically, the arrival process to a queue is random; that is, the arrivals do not follow any pattern and the packets are spaced apart by random amounts of time. In this more realistic case, the quantity La/R is not usually sufficient to fully characterize the queuing delay statistics. Nonetheless, it is useful in gaining an intuitive understanding of the extent of the queuing delay. In particular, if the traffic intensity is close to zero, then packet arrivals are few and far between and it is unlikely that an arriving packet will find another packet in the queue. Hence, the average queuing delay will be close to zero. On the other hand, when the traffic intensity is close to 1, there will be intervals of time when the arrival rate exceeds the transmission capacity (due to variations in packet arrival rate), and a queue will form during these periods of time; when the arrival rate is less than the transmission capacity, the length of the queue will shrink. Nonetheless, as the traffic intensity approaches 1, the average queue length gets larger and larger. The qualitative dependence of average queuing delay on the traffic intensity is shown in Figure 1.18. 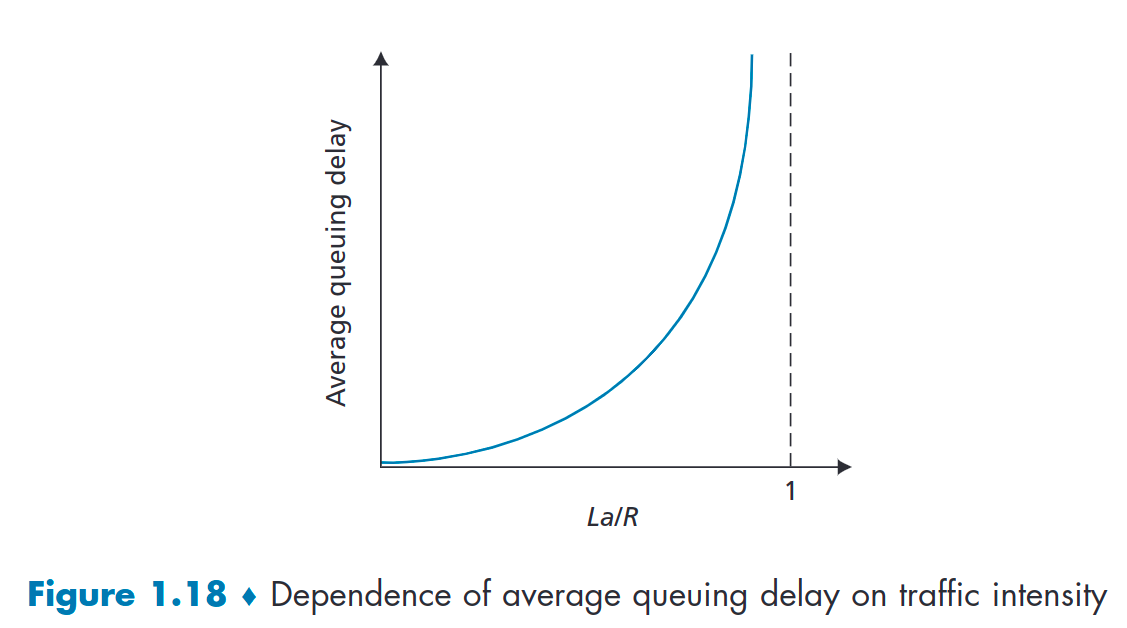 Browse other questions tagged or ask your own question.

1
Average number of slots needed in slotted-Aloha
0
How to calculate probability of packet loss and drop rate?
0
Is it possible to calculate the propagation delay if only the length of the link is known & not the speed at which a bit travels into the link?
3
How can average queuing delay exceed 1 if the $La/R \leq 1$?
2
Network throughput with random delay selected from uniform distribution
1
Finding the optimal packet size