Why recording non-existent children in the pre-order traversal will differentiate different binary trees?

I have tried to solve and understand LeetCode question "297. Serialize and Deserialize Binary Tree", and after I read their solution I came up with a question that I will be glad If you can help me to understand. First of all, two binary trees with different structures can have the same preorder result and that is the first problem in the leetcode solution they are going to solve.

T1 != T2 but they have the same preorder result as you can see above.

More Info about this trick can be found in the Cracking the Coding Interview book on page 265: 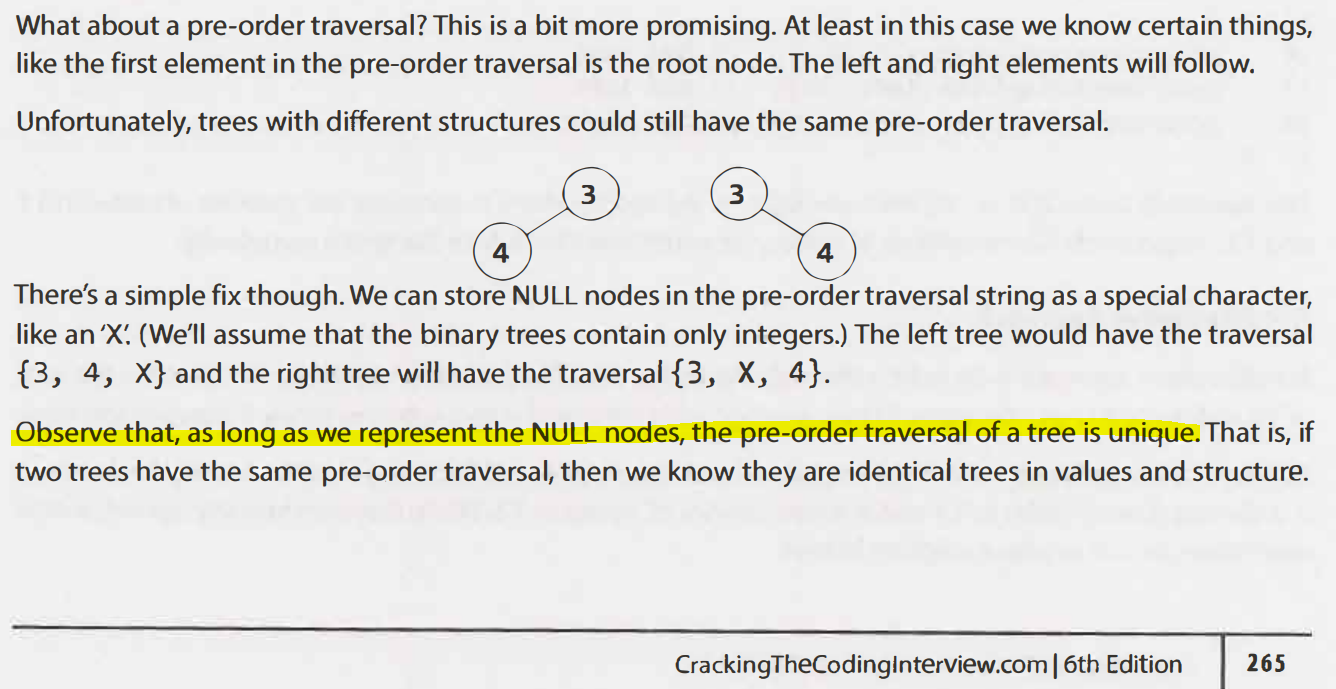 When we change each non-existent child of each leaf node into a special node , a binary tree becomes a full Binary tree with distinguished leaf nodes.

Corollary 3. Let $F$ be a full binary tree with distinguished leaf nodes. Let $[u_0, u_1, \cdots, u_{n-1}]$ be the preorder traversal of $F$, where $n\ge3$ is the number of nodes in $F$. Scanning that list of nodes from left to right, let $d$ be the first index when we have scanned the same number of leaf nodes as the number of internal nodes. Then

Proof. Since leaf nodes are distinguished, we know whether each node is a leaf node or an internal node by looking at its value/representation in that list. This corollary follows from Corollary 2, noting that the first node visited, $u_0$, the root node is an internal node. $\checkmark$

Claim 4. A full binary tree with distinguished leaf nodes is determined uniquely by the result of its preorder traversal.
Proof.

Exercise 1. What happens to the postorder traversal of a binary tree?

Exercise 2. What happens to the inorder traversal of a binary tree?

Not the answer you're looking for? Browse other questions tagged algorithms trees binary-trees graph-traversal or ask your own question.

3
Algorithm to determine two binary expression trees will give the same result based on associative and commutative properties of some operators
1
Example of Random Binary Tree?
2
Proving Postorder Traversal's Time Complexity
11
Can the pre-order traversal of two different trees be the same even though they are different?
2
How to merge a lot of trees into one single graph?
1
Complexity of "Subtree of Another Tree"
3
When should we construct trees, graphs to analyse an algorithm?