Suppose we are computing a sum over $n$ factors which can be represented as a planar tensor network. What is the complexity of finding an optimal elimination order?

Each variable $vi$ takes integer values in $1\ldots di$ and factor $f(a,b,c)$ is a multidimensional array indexed by $a,b,c$. This is a tensor network because each variable occurs in exactly 2 factors, and we can represent it graphically by drawing factors as vertices and variables as edges in planar graph $G$ 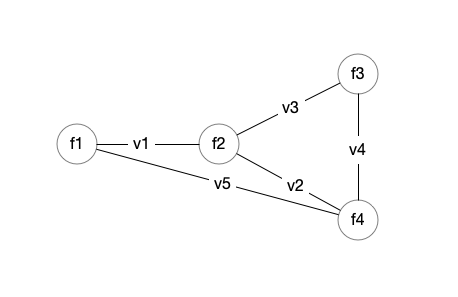 Given a sequence of variables, we eliminate variables in sequence order by summing out one variable at a time. For instance, starting with $v_1$, performing the first elimination reduces our problem to the following summation over 4 variables. 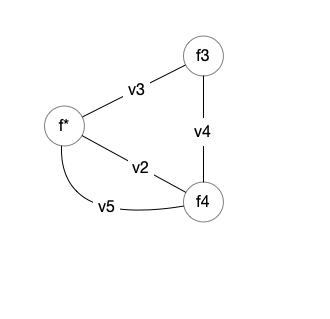 Suppose every variable in the summation ranges from 1 to $d$. Then at least one elimination step has a cost $d^c$ where $c$ is the carving width of $G$. For planar graphs, the "ratcatcher" algorithm takes $O(n^3)$ time to find elimination order where the slowest step has cost $d^c$ (page 12 of Branch and Tree Decomposition Techniques for Discrete Optimization)

1
Finding a graph where the edge set satisfies a set of integer equations
2
0-1 Knapsack problem with item discounts
1
Need help understanding Knuth's proof that: The set of all pure words is well-ordered by the relation >