Complexity of still life extentions in Game of Life

The game of life is one of the most famous cellular automata in 2D. It has a variety of objects, some of them are moving like gliders, some have an oscillating behavior and others do not change at all, i.e. are still lives.

I am interested in the computational complexity of finding still lives. Especially in a restricted setting: by adding constraints to fix some cells to be dead or alive. In this setting, it becomes an extension problem: Starting from an initial pattern and asking whether it can be extended to form a still life.

So far, I was able to prove the NP-completeness of the following decision problem (by reducing planar circuit SAT to it): 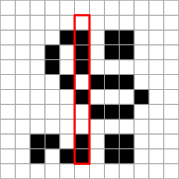 The same can be asked for the infinite setting when the grid covers the whole plane ($G = \mathbb{Z}^2$). But I want to reformulate it a bit:

Question 3+4: Does every 1D pattern of cells appear as a cross-section of a still life? Here the input is a 1D pattern of length $k$ and the question to decide is whether there exists a still life extension or not (Note: There is no restriction on the size of the pattern). Is this question decidable? Same question for a rectangular initial pattern.

Browse other questions tagged complexity-theory np-complete cellular-automata or ask your own question.