Copying a linked list with additional arrows from each node

Consider the following modified node structure for the linked list:

The next field points to the next element in the list. The random field points to some other node, which is guaranteed to be in the same list. E.g. (black arrows denote next, purple - random):

I came up with the following solution (I will explain what bothers me about it further):

Now, we can copy the structure of random arrows. We simply start traversing the list following the rule (keep in mind, black and blue nodes constantly alternate):

Intuitively, I would draw this process like this (as physicist may put it, orange arrows denote "distance", purple ones - the "displacement"): 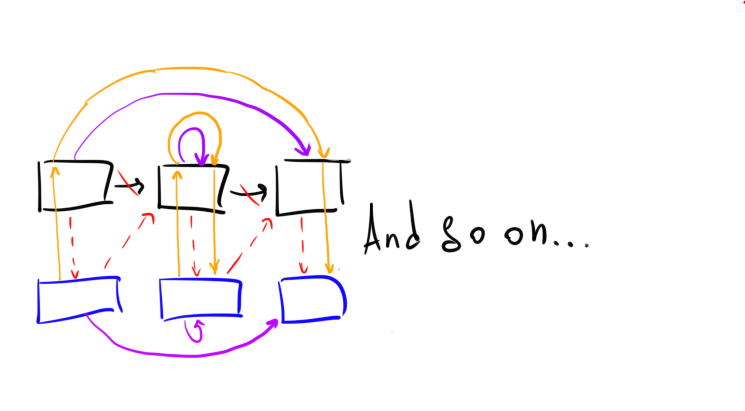 And then we split this list into two (black and blue) in an additional third traverse. Voila!

What I dislike about this solution:

So, my questions are:

I would appreciate hints instead of full solutions :)

A very simple approach is to build up a hashtable that maps from the address of the original node to the copied node. Then, it is easy to copy the entire linked list. A single linear traversal of the list suffices, and the link can be read-only.

Not the answer you're looking for? Browse other questions tagged algorithms data-structures discrete-mathematics linked-lists or ask your own question.

8
Sorting a list of strings in lexicographic order of sorted strings
1
An algorithm to generate possible binary grid patterns
2
Insertions in Red-Black Trees
2
Playing the game of life on an infinite grid
2
"Visited" vs "Seen" Positions in Breadth-First Search
0
LinkedList: Remove the kth node form the end
0
Is this a general compression algorithm?