Number of Inversions found in Selection sort vs Exchange sort

Exchange sort is similar to selection sort, just swaps "overly eagerly" instead of finding the minimum and doing only one swap. And the swaps affect how often the if ... is true. For example for 8000 random numbers, in exchange sort it's true ~270 times more often:

Why is it so much more often? Does someone have a good explanation? I did expect some noticeable difference, but not this much.

What's the expected number of trues for each?. For exchange sort it looks quadratic, for selection sort maybe linearithmic?

This was inspired by another question, from which I also took the code.

algorithms sorting python
Share
Improve this question
edited May 6 at 20:33

For ease of analysis, assume the numbers in the given array are distinct. This assumption does not change the asymptotic nature of problems at hand.

WLOG, assume the given array is selected uniformly from all permutations of $0, 1,\cdots, n-1$.

Claim 2. The expected number of inversions found by selection-sort in the inner loop is $\frac12 + \frac13+\cdots+\frac1{n-i}$.
Proof. At the start of inner loop, the "comparison structure" of $nums[i:n]$ is uniformly random. The probability of $nums[j] < nums[idx\_min]$ is the probability of the random number at index $j$ being less than all $j-i$ random numbers right before it, which is $\frac1{j-i+1}$ since the randomness here comes from sampling from distinct numbers without replacement. $\quad\quad\checkmark$

"Why is it so much more often?"

The reason is embodied in the proof of two claims above. Also see asker's wonderful and enlightening explanation.

Here's another perspective. Less mathematical, but I think also insightful. Using a fabulous sort visualizer (taken from this), here's random data and how the data looks midway through sorting with the two algorithms. 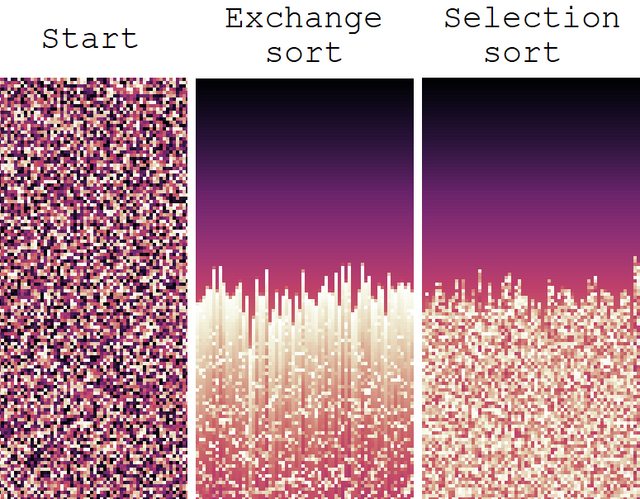 It visualizes sorting many arrays in parallel, each array is a column, index 0 is on top, and dark colors are "smaller" than bright colors. Try it yourself, select the sorting algorithms on the right, then click "Start".

For selection sort, we see what John L. said: The still-to-be-sorted part nums[i:n] looks completely random. And it is: It is at the very beginning, and what's done inside the outer loop keeps this property. If nums[i] is the smallest in nums[i:n], then we don't really swap and nums[i+1:n] remains as it is, i.e., remains completely random. If on the other hand nums[i] isn't the smallest, then its value plays no role whatsoever in determining idx_min. That index is entirely determined by wherever the smallest element is. And since nums[i] plays no role for this, its relationship with all other values in nums[i+1:n] (other than the smallest) can be anything. Hence swapping it it to idx_min makes nums[i+1:n] completely random as well.

Look at the exchange sort visualization instead. There we see that the still-to-be-sorted bottom half already looks somewhat (reverse-)sorted. A lot of bright colors, i.e., large values, near index i. And getting darker going down. Why is that? Consider what the inner loop does. It goes through the remaining nums[i:n], puts the smallest value at nums[i], and whenever it finds an even smaller value, it swaps nums[i] there. That finds a descending subsequence in nums[i:n] and "rotates" it to the right. Here's an example where the descending subsequence is 30, 20, 10 (and what the other values between/after might be): 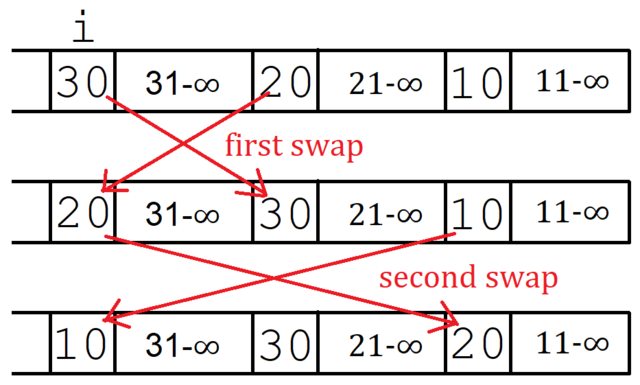 Now imagine that for example the block of numbers containing values from 31 to infinity actually contains the number 31. And that the other two later blocks similarly contain the number 21 and 11, respectively. Before the swaps, we see the order 30-31-20-21-10-11. So going up-down-up-down-up. But after the swaps, we see the order 10-31-30-21-20-11. So going up-down-down-down-down-down. The part after the 10 is all going down. We've taken the subsequence 30-20 and shifted it to the right so that it "falls more in line" (order-wise) with the rest, so that the remainder is now more sorted (descendingly) than before. And these longer descending subsequences are then found and handled in later rounds (for larger i), causing more work there.

So to summarize: Selection sort keeps the remainder unsorted, which is good. While exchange sort shoots itself in the foot by partially sorting the remainder in a way that's detrimental for it (causes more inversions / more work).

Not the answer you're looking for? Browse other questions tagged algorithms sorting python or ask your own question.