Suppose that $G = (V, E)$ is an unweighted digraph, $s$ and $t$ are two vertices of $V$, and $t$ is reachable from $s$. The LMC Problem studies how we can make $t$ unreachable from $s$ by the removal of some edges of $G$ following the following constraints:

This second constraint is called logical removal. So we look for a logical, minimal removal of some edges of $G$ such that $t$ would be unreachable from $s$.

If we ignore the logical removal constraint of LMC problem, it will be the min-cut problem in the unweighted digraph $G$, so it will be solvable polynomially (max-flow min-cut theorem).

If we ignore the minimal removal constraint of the LMC problem, it will be again solvable polynomially in a DAG: find a vertex $k$ such that $k$ is reachable from $s$ and $t$ is not reachable from $k$. Then consider a path $p$ which is an arbitrary path from $s$ to $k$. Now consider the path $p$ as a subgraph of $G$: the answer will be every exit edge of the subgraph $p$. It is obvious that the vertex $k$ can be found by DFS in $G$ in polynomial time. Unfortunately this algorithm doesn't work in general for an arbitrary directed graph.

I tried to solve the LMC problem by a dynamic programming technique but the number of required states for solving the problem became exponential. Moreover, I tried to reduce some NP-Complete problems such as 3-SAT, max2Sat, max-cut, and clique to the LMC problem I didn't manage to find a reduction.

I personally think that the LMC problem is NP-Complete even if $G$ is a binary DAG (i.e., a DAG where no node has out-degree greater than 2).

Let G = (V, E) be a weighted DAG, s and t be two vertices of G, and LSTMC = (G, s, t) be an instance of the logical s-t min-cut problem. It is obvious that the LSTMC problem is NP.Now, we should show that the LSTMC is NP-Hard. We reduce the hitting-set problem to the LSTMC problem. Let S = {s1, s2, ..., sn} be the given sets and {a1, a2, ..., am} be the union of all the sets. Given the number k1, the decision problem of the hitting set problem states whether there exists a set A with k1 elements such that every element of S (every set si s.t. i = 1..n) contains at least one element of A. We denote the hitting set problem as HS(S). We construct the weighted DAG G′ from the set S by Algorithm HS2LSTMC. This algorithm considers s as the source vertex of the DAG G′. For each set si of HS s.t. i = 1..n, the algorithm considers the corresponding vertex, si, and adds an edge with infinite weight from s to each si. Then, for each element aj of the union of the input sets s.t. j = 1..m, the algorithm considers the corresponding vertex, aj, and adds an edge with zero weight from each si to any aj s.t. aj ∈si in HS. Finally, the algorithm considers two final vertices called t and k, and add two edges from each aj s.t. j = 1..m to the both final vertices. It is clear that G′ can be made in polynomial time.

For simplicity, we perform this part of proof, by providing an example: 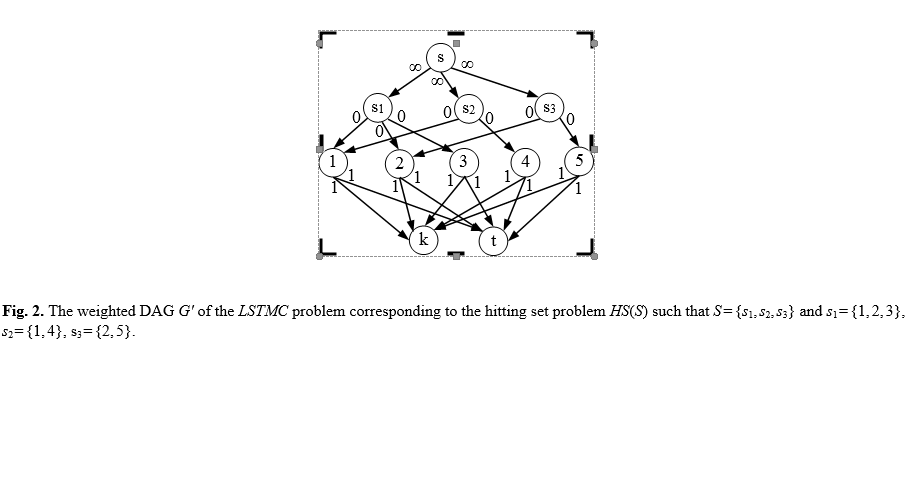 Here's (an attempt at) a polynomial-time algorithm for LMC on arbitrary binary DAGs $G$.

This answers Question #3. (Sorry for the messy write-up ahead of time. :))

To begin, throw out "forever" any vertex not reachable from $s$. We don't care about these, since they're not part of any $s$-$t$ path.

Then, compute the transitive closure of $A$. Namely, we are interested in finding some set of vertices $\{a^*\}$ that are the "leaves" of the sub-DAG $A$.

This is where we use the fact that the graph $G$ is a binary DAG.

Consider the set of predecessors of $\{a^*\}$. Since each of these vertices has out-degree at most two, there are exactly three cases:

In this case, we must either delete both edges from the $\{a^*\}$ to $t$, or we can delete a single earlier edge in the path from $s$ to the predecessor that disconnects both paths.

Altogether, as we scan backwards through predecessors in the transitive closure of $A$, we can greedily keep track of the "best so far" choices. That is, at every step, we have an obvious choice that involves deleting some number of edges, but we want to wait to see whether a better option is available. Once a better option is found, we can "forget" about the previous option. Hence, a greedy choice at each layer of predecessors suffices (so long as we wait until the end to commit to any choice).

Therefore, with some basic memoization, the time and space complexities of this process appear to be at most $O(|E|)$. This leaves out the fact that, while we can locally/greedily identify when we have found a "cheaper choice," it's a priori unclear which previously-recorded edges to remove. Therefore, we record the order in which we check edges as we go. Upon finding a better option, we repeat the search up to this point in order to find which previously-recorded edges to remove. The total time complexity of this step is $O(|E|^2)$ and space complexity $O(|E|)$.

Upon completing the process, we obtain the minimum set of edges required to disconnect $s$ from $t$ while preserving at least one out-edge of every vertex in the graph (or we discover that a solution is impossible along the way, and abort).

Not the answer you're looking for? Browse other questions tagged complexity-theory graphs np-complete or ask your own question.