Or it’s the case that going from Bubblesort to Quicksort such a large conceptual leap that there isn’t really a way to “meta-explain” what is the thinking process to go from one to the other?

Another way to put this is: Is there an meta-algorithm to make an algorithm like Bubblesort become an algorithm like Quicksort? Or this still understood so poorly that all we can say is: give the problem to a planet full of human neural networks and wait some years?

I wonder if the way to find out would be to start with the slowest possible algorithm: reorder the list in all possible arrangements, select the one that is ordered and from there look for ways to add constraints to be more efficient… perhaps using something like miniKanren relational programming…

Algorithm design is known to be an art. There is no magical recipe. It all depends on the mathematical properties of the problems addressed.

In the case of sorting, the designers were helped by a few theoretical considerations:

These a priori complexity results serve as guides for algorithm design and tell you how close you are from a good solution.

It turns out that incremental processing yields simple but $O(n^2)$ algorithms, while D&C results in $O(n\log(n))$ for MergeSort (but requires an extra array), and $\Omega(n\log(n))/O(n^2)$ for Quicksort (so is not optimal, but fast in practice anyway).

None of these algorithms are perfect. There is another, which does not fall in the above categories and relies on an unexpected concept: the heap. This is a special data structure which consists in an implicit binary tree with an order relation between the keys. And it turns out that building a heap takes $O(n)$ time, and extracting the smallest element $\lg(n)$ time at worst. This gives birth to HeapSort, a good algorithm with guaranteed $O(n\lg(n))$ behavior.

There is much more to say about sorting and algorithm design. The morale is that there are general principles, but creativity is still required.

No matter how much one optimizes its code, a bad algorithm will always be bad. The key to great software is starting with a great algorithm.

Consider an extreme example.
The best theoretically possible algorithm will require n×log(n) comparisons. But if the comparison keys are dense enough (or if they can hash to numbers that are dense enough), they can be sorted with a linear order algorithm (radix sort), which is significantly better than n×log(n).
There is no way anyone can start with a comparison sort and gradually improve it into a radix sort; the two algorithms are so fundamentally different.

Bubblesort to Quicksort requires some cleverness, but is a quite natural progression.

Mergesort is actually already optimal in Big-O notation, but making an algorithm twice or three times as fast is still worthwhile. So we would analyse what's bad about merge sort, and it is mostly the fact that we need additional memory. Swapping elements doesn't require more than constant additional memory. Figuring out the Quicksort partition algorithm is difficult, but possible enough.

When you examine Quicksort more closely, two annoying things are the worst case which you fix by randomising the pivot, and the fact that it doesn't take advantage if the data is already sorted or mostly sorted.

Another implementation assumes that your array was created by starting with a sorted array, and adding / removing / appending / changing a few values, fewer than O (n / log n). Here we can remove all the items that are not in sorted order, sort them separately, then merge. This also works well if you take an array containing a million names, sorted correctly according to one of the official German sorting orders, and sorting it according to the official Swedish sorting order.

The last two changes are both quite natural.

I agree that there is no recipe and others provided insight on how matters evolved or can evolve. A key aspect hindering the design of your "meta-algorithm" is a lack of "modularity" in Computer Science. The theory of algorithm design (and analysis) is not on par with say civil engineering, for which automation is more advanced. Newton's calculus supports the prediction of properties of a bridge from the blue-prints. Hence such projects can be designed and analysed in a modular fashion (properties of the materials lead to a prediction of properties of the end product).

Computer science faces a hurdle on that front since all parts interact in a multitude of ways (input-dependency) and is not yet at the stage where your question can be fully answered. The field is less than 100 years old (as a science). Other fields, in comparison, have been developed for millennia (though of course computation has been around for a lot longer than the advent of computers).

The other answers here explain very well the mathematical idea and thought process to come up with a sorting algorithm, there might be cases where even the "most optimal" algorithm you have, may not deliver the performance you expect. Of course they all sort so they are correct, but in practical scenarios, lower execution times(time and space complexities)are desirable. Often, algorithms are "combined" resulting in a hybrid implementation, which performs better than any algorithm alone. The choice of algorithms to pick depends on the nature of data and empirical results.

An example: Combining merge sort and insertion sort is helpful as for fewer values and completely/nearly sorted data, insertion sort performs better than merge sort. So you can perform merge sort, and once the sub problem size becomes reasonably small, you can use insertion sort.

And here is my meta-algorithm for creating fast algorithms and fast implementations of algorithms:

Step 2: Run the algorithm and figure out what bits run slower than you think they should. At this point you also understand the problem better.

Step 3: With your better understanding of the problem, and your knowledge what makes your current algorithm slower than it should be, create a new algorithm and go back to Step 3.

I'm going to pull my answer from the book Introduction to the Design and Analysis of Algorithms by Anany Levitin. Anything in blockquotes is directly from the book. Here's the steps he gives in the book: 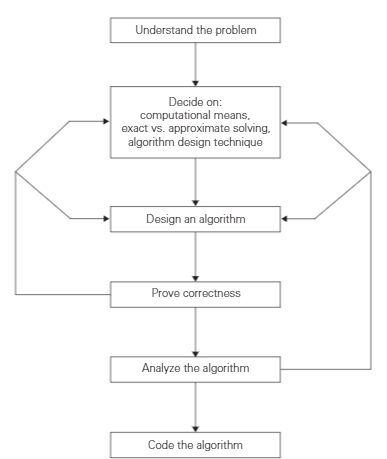 The next principal decision is to choose between solving the problem exactly or solving it approximately. In the former case, an algorithm is called an exact algorithm; in the latter case, an algorithm is called an approximation algorithm. Why would one opt for an approximation algorithm? First, there are important problems that simply cannot be solved exactly for most of their instances; examples include extracting square roots, solving nonlinear equations, and evaluating definite integrals. Second, available algorithms for solving a problem exactly can be unacceptably slow because of the problem’s intrinsic complexity. This happens, in particular, for many problems involving a very large number of choices...

Measure how well the algorithm performs. There are several qualities to keep in mind:

If you are not satisﬁed with the algorithm’s efﬁciency, simplicity, or generality, you must return to the drawing board and redesign the algorithm. In fact, even if your evaluation is positive, it is still worth searching for other algorithmic solutions.

Finally code the algorithm. Make sure to test to make sure it's working properly.

"Okay this is fine and dandy, but that still doesn't answer the question about how we got from Bubble Sort to something like Quicksort"

It's a fact that an array grows, the time to sort doesn't grow linearly, but exponentially. What we realized was that partitioning the array into smaller sub-arrays, sorting those sub-arrays, then recombining them resulted in a massive speedup. This is basically what algorithms like Merge Sort and Quicksort is doing.

371
Why is quicksort better than other sorting algorithms in practice?
2
Complexity of an algorithm for bounding a region in 2D
2
How many basic operations are there in an algorithm for the simple multiplication of two numbers of equal length?
0
Question about time-complexity for MST-like algorithm
4
SAT Solver Front-End: Strategy to order Quantifiers
1
How to calculate the number of invalid strings given a constraint system on alphabet, word blacklist, and string length
1
How can I make my algorithm more efficient or Is there a better way to solve the problem