I have system of two polynomial two variables, second order; monomials are {${1,x,y,x^2,xy,y^2}$} I want find special systems of polynomials: two or more roots in specified range, two root close to each other, roots on boundary search range, etc.
I can set one root to specified position by setting first term of polynomial (without x or y) to counterbalance all other terms. But this is only one root. How to search ?
IS 2*6 parameters, two of them are first terms, next two can be not taken into account because polynomial * constants has the same roots.
Is 8-10 parameters, I try random parameter , change it to be best result (how?), next change parameter, search to best result, etc.. Changing one parameter need one dimensional search : or Brent method,Dekker method or Golden-Section search?

If I understand correctly, you want to build two quadratic bivariate polynomials such that the roots of the system they form fulfill some predefined conditions.

Geometrically, this corresponds to the intersection of two conics, which generally come in fours. Consider four arbitrary point P, Q, R, S. They define two pairs of straight lines, let PQ, RS, PR and QS. Writing the implicit equations of two lines and forming their product, you obtain the implicit equation of a degenerate conic. Hence you can write the equation of two distinct conics by the four points.

Finally, form a linear combination of these two equations and you get a pencil of conics by these four points. Take any two members of the pencil.

Using this trick, you have total control on the placement of the roots. 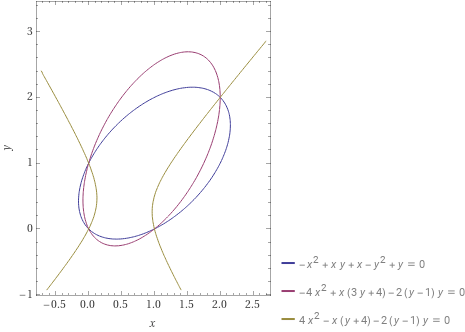