What data structure/s can I use for fastest lookup of a permutation between two arrays of pairs (preserving order)?

I'm trying to figure out a more efficient solution to the following problem.

Dataset: A set of arrays of key-value pairs (K, V). The arrays have varying lengths, and the keys are non-zero 16-bit unsigned integers.

Input: A fixed-length array of key-value pairs (J, U). The keys are non-zero 16-bit unsigned integers.

The example is 4 elements, in the actual implementation it's always 8.

Expected Output: An array with length equal to one of the dataset arrays. The array elements are pairs of values from the dataset and input. I'm not sure how to express this in mathematical notation, so here's some pseudocode for a naive implementation:

To attempt to state the algorithm in words: I need to see if there exists an array in the dataset for which every pair has a matching (by key) pair in the input. If there is such an array, I need to construct an output array of pairs of the values from each matching pair between the dataset and the input.

Caveat: The algorithm above is actually insufficient because if there are multiple valid outputs, one needs to be chosen at random, or at the very least in a way that prevents aliasing. In practice I'm doing this by shuffling the input array and using the solution below. This is also what makes it difficult to consider solutions that require sorting the input array.

The current working solution I have is to store a tree containing all possible continuation nodes given input in any order. Nodes which represent the completion of one of the dataset arrays also have the V values from the array in the order the array was traversed. For example the array [(1, 200), (1, 100), (2, 300)] may be represented by the tree in the following diagram (with the output values in red boxes): 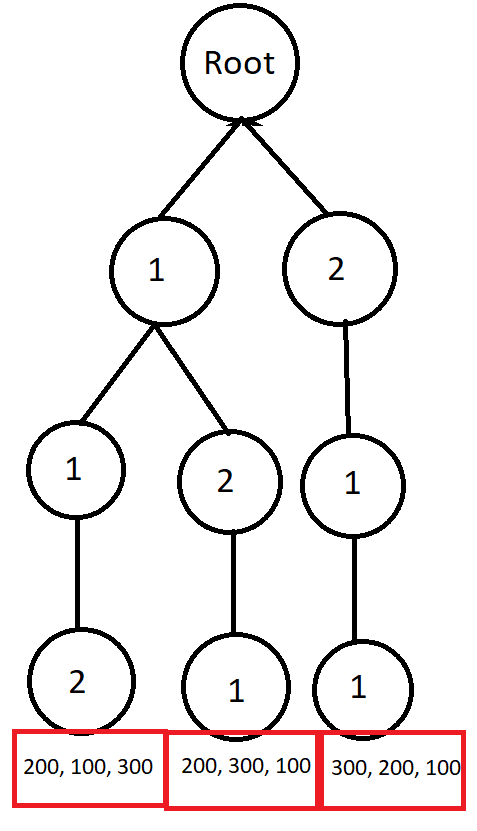 In this case, I find the solution like this:

The time taken to construct the data structure is not important, nor is maintenance cost or cost of any operation other than lookup, and generally there is plenty of space but I would like a structure that can be stored contiguously in memory.

Sorry if the way I've described the problem is confusing, I don't have the background in mathematics to know any of the terminology to help describe it. Please do ask for clarification in the comments.

If I understand correctly, we can reformulate your problem as following:

We have a database that contains a set of sets $S_1,\dots,S_n$. You are given an input set $I$. The goal is to determine whether there is any set in the database that is a subset of $I$: i.e., does there exist $i$ such that $A_i \subseteq I$?

Here I am treating each array as corresponding to the set of key values in the array. The above contains the core challenge of your problem. If such a set exists, and we can find which one it is (which is a "full match"), then we can easily derive the mapping to values and obtain the desired array of pairs.

So, you want to support subset queries. Unfortunately, this is a hard problem. You can take a look at the following questions to see if any of the methods mention there will be of use to you:

I don't know whether these will be useful to you in practice.

6
Data structure for a static set of sets
8
Best data structure for queries about subsets?
7
Data structure for testing all subsets of a query for membership
4
state of the art of subset, set containment and partial match queries
3
How to get the quick answer to the "Is there AT LEAST ONE subset that contains all given elements?" question if the set of subsets is very large?

2
Finding the best combinations between items of 2 arrays in a sequential manner
1
A many-to-many mapping data structure
2
Remove duplicates from dictionary in a safe and clever way
3
Is there a $O(n\frac{\log{n}}{\log{k}})$ sorting algorithm?
2
Find original array from array with pairs of adjacent elements
1
Data Structure to Support Max Value of Keys Greater than Given Value