How does an admissible heuristic ensure an optimal solution?

When using A* (or any other best path finding algorithm), we say that the heuristic used should be admissible, that is, it should never overestimate the actual solution path's length (or moves).

How does an admissible heuristic ensure an optimal solution? I am preferably looking for an intuitive explanation.

If you want you can explain using the Manhattan distance heuristic of the 8-puzzle.

While Anton's answer is absolutely perfect let me try to provide an alternative answer: being admissible means that the heuristic does not overestimate the effort to reach the goal, i.e., $h(n) \leq h^*(n)$ for all $n$ in the state space (in the 8-puzzle, this means just for any permutation of the tiles and the goal you are currently considering) where $h^*(n)$ is the optimal cost to reach the target.

I think the most logical answer to see why $A^*$ provides optimal solutions if $h(n)$ is admissible is becauase it sorts all nodes in OPEN in ascending order of $f(n)=g(n)+h(n)$ and, also, because it does not stop when generating the goal but when expanding it:

And this is, essentially, all you will find in the original proof by Nilsson et al.

If the heuristic function is not admissible, than we can have an estimation that is bigger than the actual path cost from some node to a goal node. If this higher path cost estimation is on the least cost path (that we are searching for), the algorithm will not explore it and it may find another (not least cost) path to the goal.

Look at this simple example. 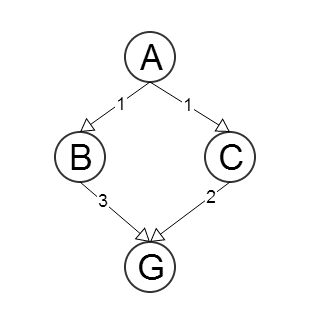 Let the heuristics be

I'd like to expand upon Anton's comment in his answer, and provide an explicit answer to the situation posed by Ashwin in the comments. I think it'll be helpful to answering the primary question. 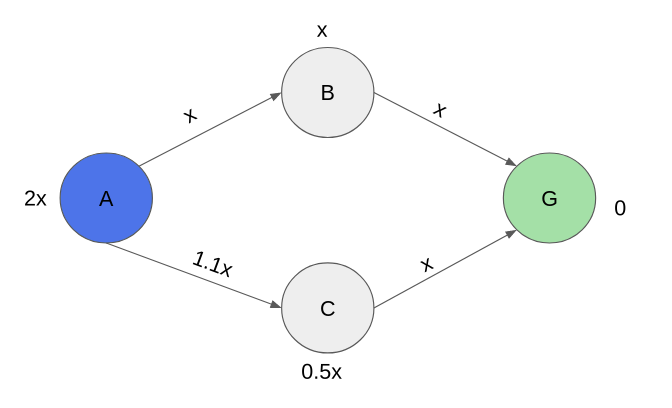 We can see that the heuristic function is admissible (i.e it doesn't overestimate the cost of reaching the goal) and consistent (ie. it decreases as we get closer to the goal node).

Here's how the A* algorithm would find the optimal solution for this graph:

Since f(C) is smaller, it picks C as the next node.

Clearly, the path from A->B is cheaper and thus A* will shift its focus to that path.

Since B->G is cheaper here and we've reached the goal node (plus traversed all paths), the algorithm ends with the (optimal) solution A -> B -> C.

Not the answer you're looking for? Browse other questions tagged algorithms artificial-intelligence search-algorithms heuristics or ask your own question.

3
How do you prove a heuristic is admissible?

2
Heuristic for Finding Multiple Goals in Graph - e.g. using Kruskals Algorithm
2
Need a practical solution for creating pattern database(5-5-5) for 15-Puzzle
0
Longest Path A*, Admissible Heuristics, and Optimalness
9
Why is the A* search heuristic optimal even if it underestimates costs?
3
Why does an admissible heuristic mean A* is optimal?
2
Informed search with a lower-bound heuristic?
3
Admissibility of heuristic in the $A^*$ algorithm
4
Does this A-Star heuristic already exist?
1
Choosing heuristic for A* algorithm where cost is less than absolute distance