Tiling an orthogonal polygon with squares

Given an orthogonal polygon (a polygon whose sides are parallel to the axes), I want to find the smallest set of interior-disjoint squares, whose union equals the polygon.

I found several references to slightly different problems, such as:

I am looking for an algorithm for minimal tiling with squares.

I will try to show this problem is NP-hard, by reduction from $\text{Planar-}3\text{-SAT}$.

Gadgets are internal configurations of geometry that will allow us to construct gates for use in a circuit, to which we will reduce $\text{Planar-}3\text{-SAT}$.

This gadget has two valid minimal-square-partition-states:

This gadget, is exactly like a 4X3-gadget, just with larger dimensions.

An endpoint-gadget is a 5X4-gadget. It is frequently used as an endpoint/pin of a gate. One of the two states of an endpoint can be valued as true, and the other false. An endpoint marks the two ends, one as $T$ and the other as $F$. The end that is covered by the large square is the value of the endpoint.

An i-wire gadget is short for implication wire.

Here is how it is used:

Now, if one endpoint is in the right state, it forces the other endpoint into a pushed-position. Example:

This is essentially a logical implication. Consider "down" to be true, then we have $A \implies \neg B$. We can also do $A \implies B$ by simply flipping the endpoint on the right.

However, this leaves the unconstrainted case:

If we combine two i-wires, we can get a two-way implication, essentially a boolean (in)equality: 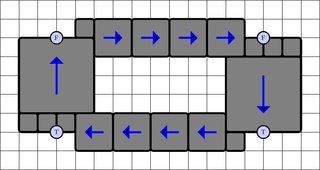 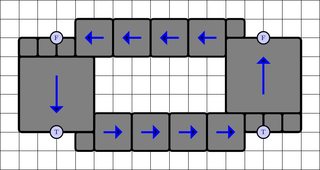 So, two i-wires can carry a full equality relationship, much like a circuit - in fact, it is a circuit. We will use these pairs to construct a usable wire.

i-wires can be oriented as needed.

A wire consists a pair of i-wires that are connected to the same gates at each endpoint. 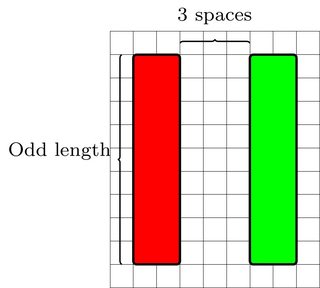 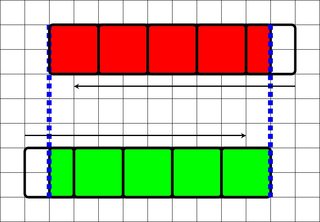 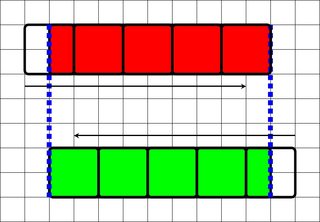 Left and right: Two possible minimal-square-partition-states of a wire. Note that if the wire is only this length, it will not be able to shift off to the right or left, and will have to break one square into smaller pieces.

wires can be oriented as needed. 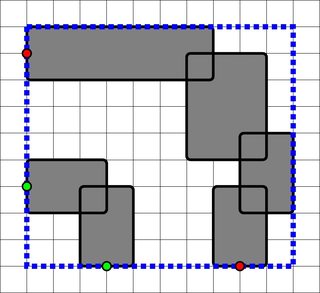 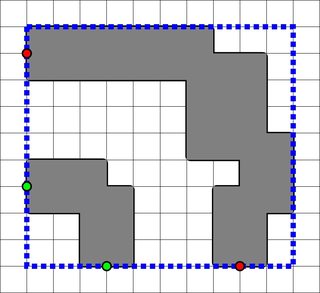 Note the use of the 4X3-gadget. It is used to fix the red lead to odd length.

Following are the two possible minimal-square-partition-states of the bend: 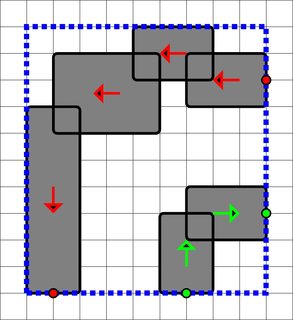 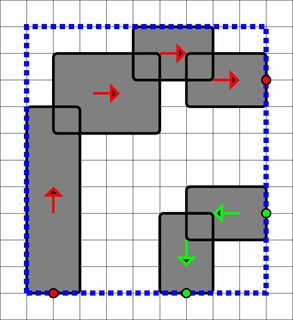 The gate can be oriented as needed. Obviously, this gate can be mirrored to work for the other direction.

It is easy to shift a wire over. Wireframe illustration:

A named-value-gate is essentially an endpoint as a gate with one wire contact: 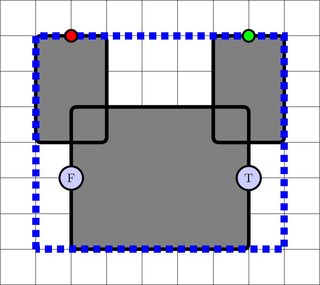 Sometimes it is inconvenient to only have odd-length wires. For example: 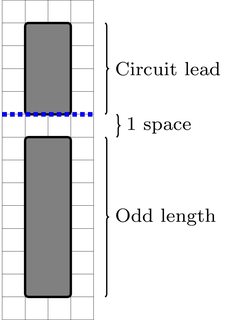 As you can see, that little bit of extension is a bit annoying. Here is a corresponding solution, using the 4X3-gate: 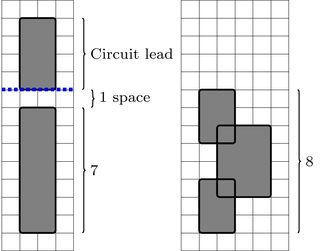 So, turning this into a gate, we get the odd-skip-gate (in wireframe): 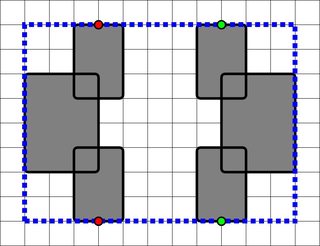 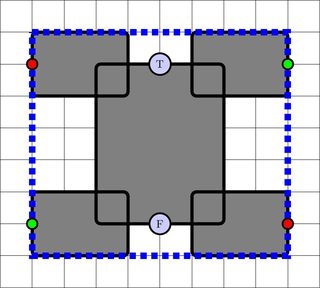 Convince yourself it works: 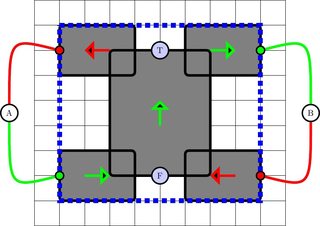 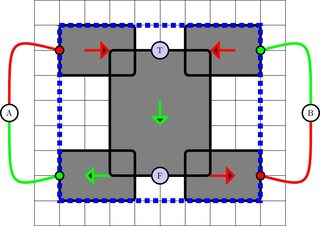 Start from $A$, follow the push-arrows, everything else should be forced and consistent. 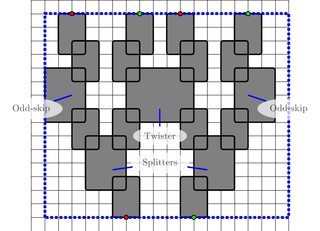 Convince yourself that it works: 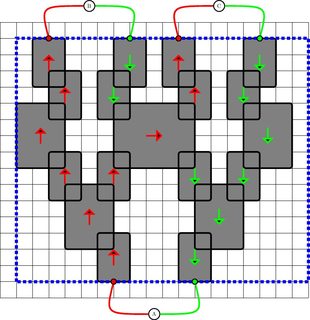 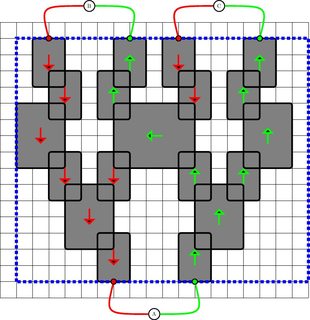 Note: Every wire coming in and out of the splitter absolutely must connect to an endpoint somewhere, in order to maintain the invariant. Alternatively, you can add endpoints to each of the pairs of leads of the splitter.

The not gate takes a wire and outputs a wire that has the reverse implications. It is basically a twist-gate, except that it relabels the colorings of the wires. The not-gate looks like this: 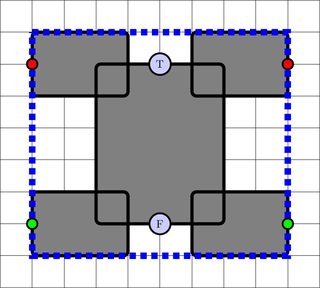 And a view of the two possible states: 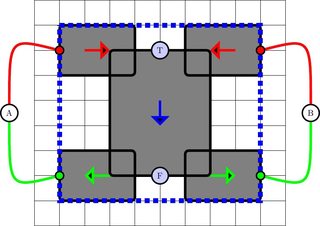 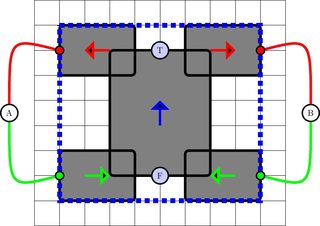 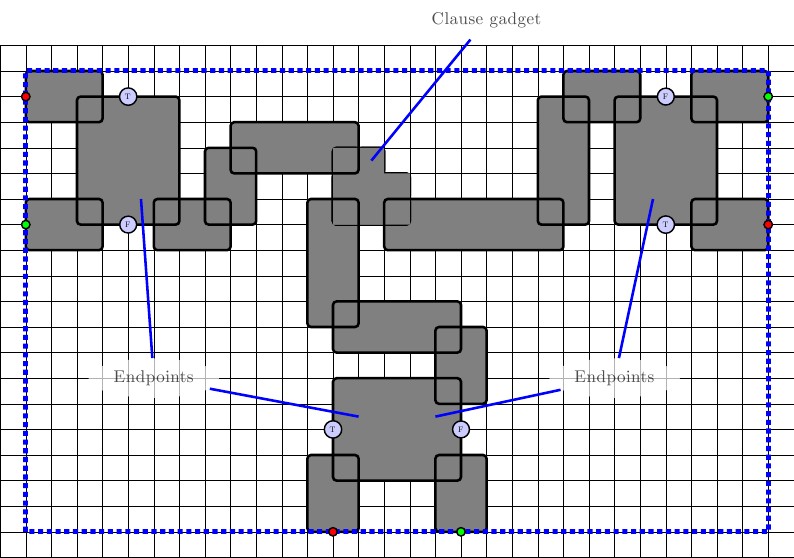 We can demonstrate the different states of this gate (explanation underneath all $3$ illustrations): 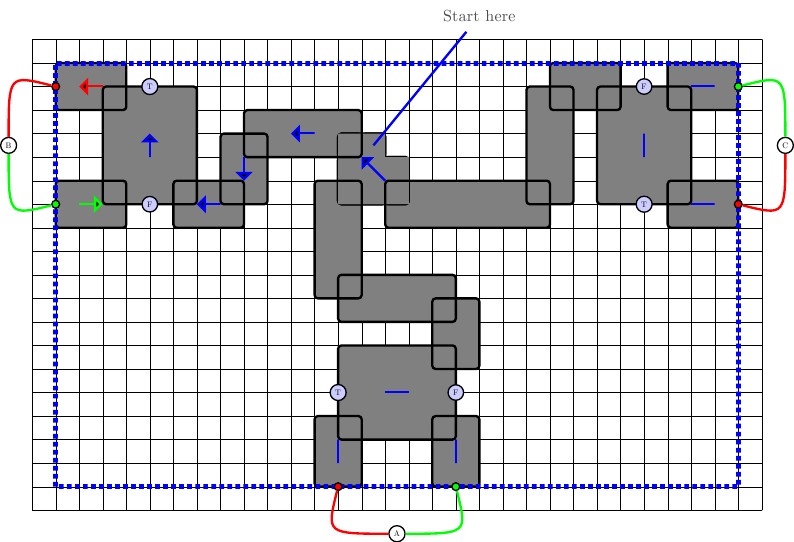 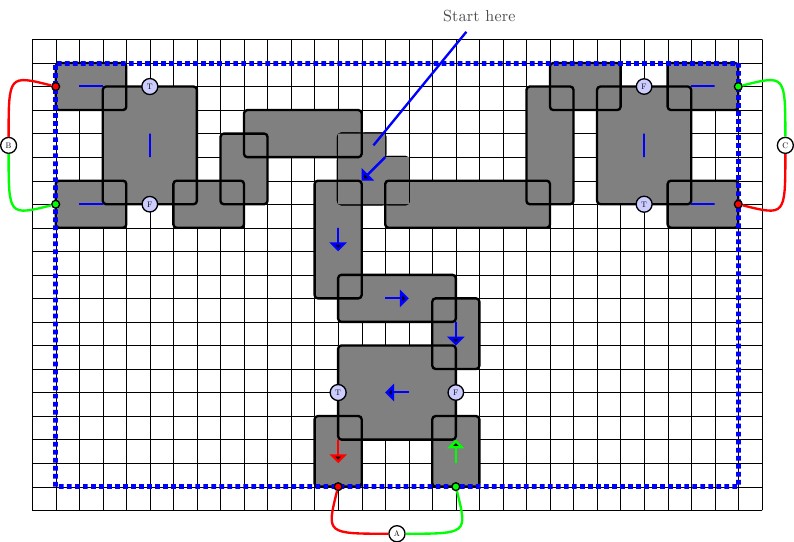 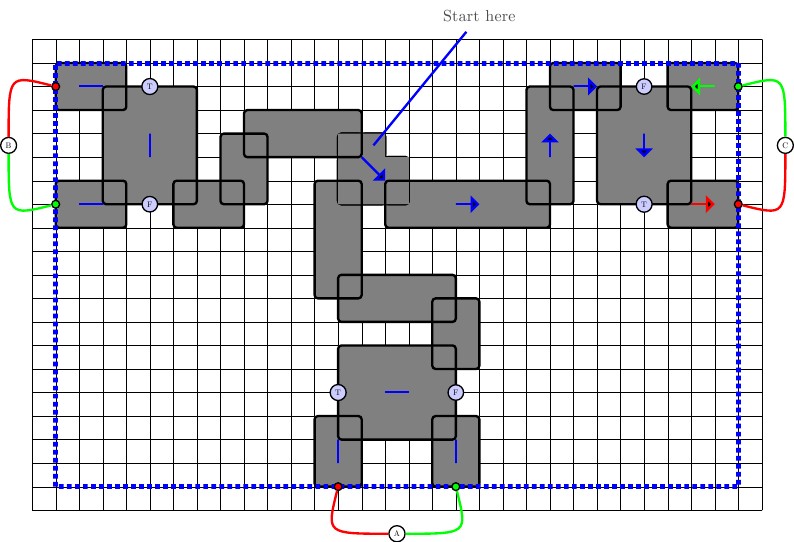 As you can see, at least one of the inputs will have to be valued as true. This is exactly what a $3\text{-CNF}$ clause requires. 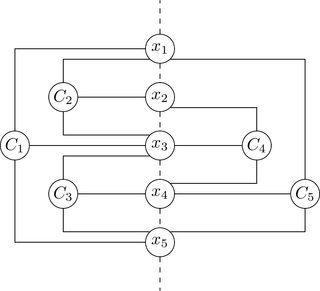 An old paper I coauthored establishes that the covering problem is polynomial for a polygon without holes, and NP-complete with holes. We showed that a key underlying graph is chordal. Please note: the algorithm is polynomial in the number $N$ of unit squares in the polygon, $O(N^{3/2})$.

However, the resulting covering may include squares that overlap. You are looking for a tiling, where squares are not permitted to overlap, so your problem is not quite the same.

Not the answer you're looking for? Browse other questions tagged algorithms computational-geometry tiling or ask your own question.

3
How to prove that the minimum square partition of a 3X2 rectangle has 3 squares
5
What is the minimum square partition of an almost-square rectangle?
19
How many cookies in the cookie box? -- Tiling stars
3
Domino and Tromino Combined Tiling
1
Is there an efficient algorithm for solving tiling puzzles?
1
Number of ways of tiling a 3*N board with 2*1 dominoes problem
0
Orthogonal range reporting with fixed upper rectangular corner
5
3xN tiling problem with blocks of size 3x1 or 2x2
0
Dynamic Programming - Tiling Question