I would have a brief question about how to construct a Turing machine that is accepting only this language:

I can't come up with any mechanism that would preserve that there are greater or equal number of 'a's than 'b's. Could you suggest me something?

I concur with the Patrick87's suggestion, so here's my version of it.

For the notation in the state diagram, I've used a slightly lazy version, to hopefully reduce some the normal clutter a little.

Now, behold in all its glory, a Turing Machine (diagram): 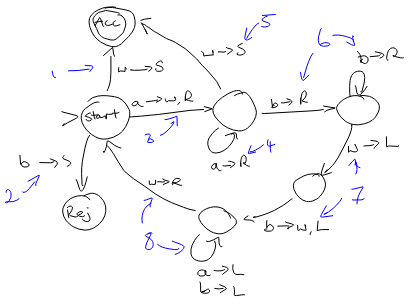 Now, a couple of notes by way of explanation. Of course this is essentially Patrick87's suggestion as mentioned, so if you already get that, you don't need to read further. These correspond to the blue numbers in the image:

I would definitely go for Patrick87's approach, since it seems very natural to pair each a with a b (e.g. marking the letters) and analyze the cases you have when one of them (or both) runs out.

Then you can set a state to reject when, for a marked a, there is no b to pair out. And you would accept the input on all other cases. 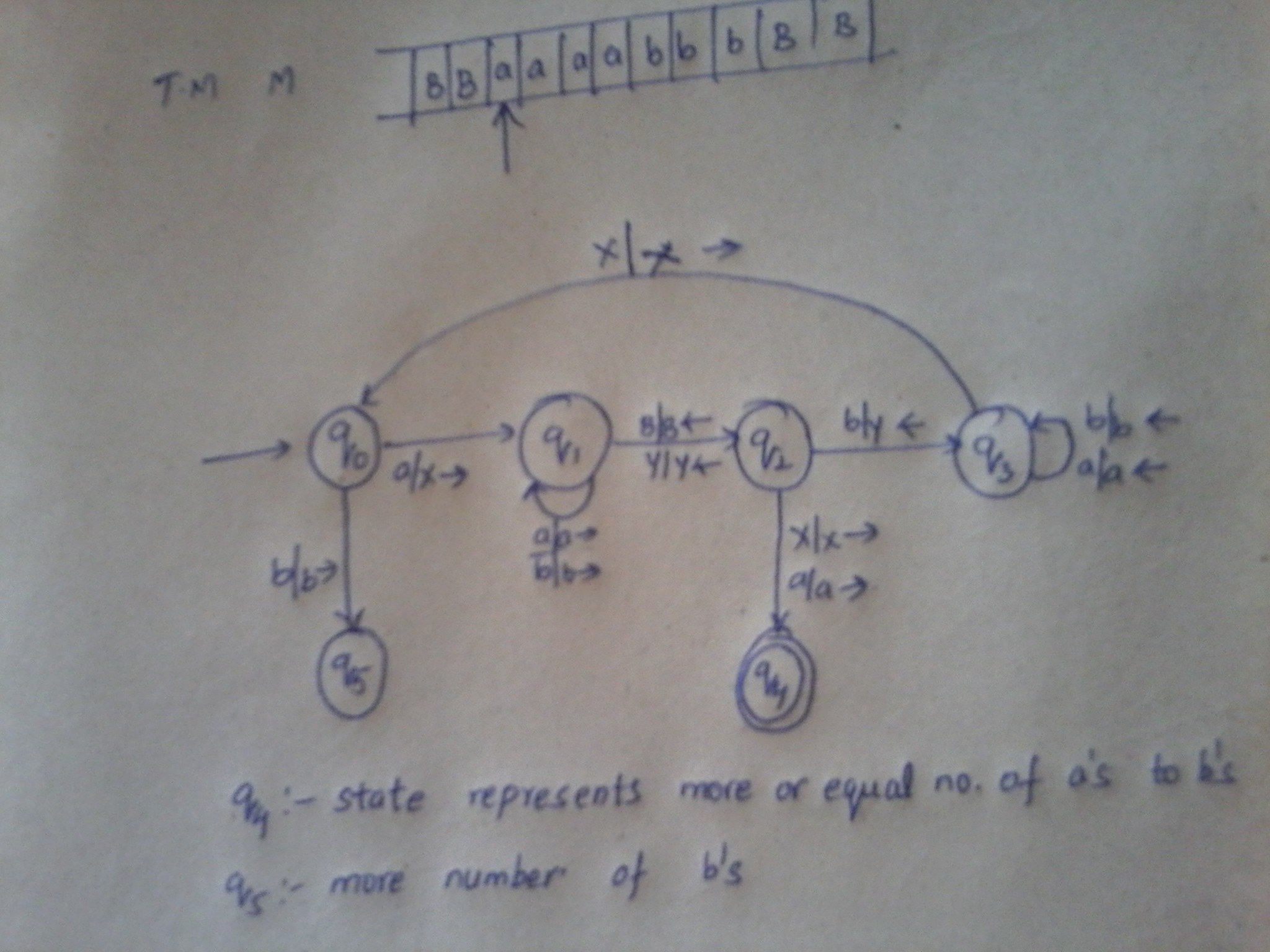 Starting from q0 state the input head is at first 'a' on the tape. Explaining regarding the states

q0 : In this state when the input head sees 'a' it replaces with 'X' and moves right changing its state to q1. But if it sees b implying that there are more b's than a's which is not required denoted by moving to state q5 which is literally dead state.

q1 : In this state all a's and b's are left as it is moving right unless it encounters a Blank symbol 'B' or 'Y'(which is the replacement for 'b'). As it encounters 'B' or 'Y' it changes its state to q2 and start moving left of the tape in turing machine.

q3: This state is similar in nature to q1 but it continues to move left unless it sees 'X' which is recent replacement for 'a' identifying that 'a' has been visited.

q4: As explained in q2, if q2 state sees either 'X' or 'a' move to acceptance state and here direction is unimportant.

q5: This state identifies if the input has more number of b's than a's. Here it is not required.

Not the answer you're looking for? Browse other questions tagged formal-languages turing-machines automata or ask your own question.

0
Turing machine that accepts language with more a's than b's

5
How to calculate the number of states in designing a Turing machine?
2
Interpreting a Language
4
Is a Turing Machine that only takes strings of the form $0^*$ Turing Complete?
2
If a language is not Turing reducible to two languages, may it still be Turing reducible to their “union”?
2
Reduction function from A to its complement
3
How to reduce $\{w \mid |T(M_w)| \geq 42\}$ to the halting problem?
0
Single tape Turing Machine that accepts string with at least five G's and at most three T's?