And I need largest possible number $n_z$, for which i can prove that every NFA, which accepts $L_z$, have $n_z$ states, at least!

There is an algorithm to construct a minimal DFA for a regular language. In this case, it isn't too hard to come up with a DFA with $z(z+1)/2$ states. 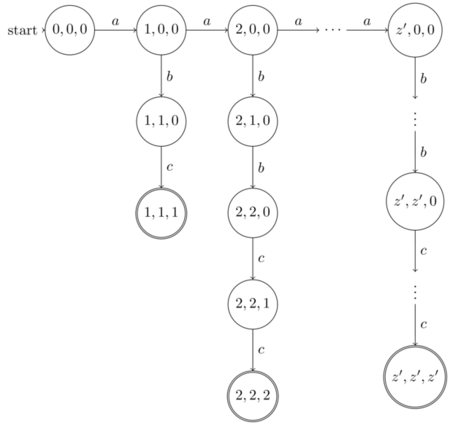 Following the usual convention, if there is no transition for a particular letter from a particular node, the automaton goes to a sink state.

It's possible to compress this automaton a bit.

Notice that every side branch finishes by counting the c's. Instead of tracking how many c's have already been seen, think in terms of how many c's are left to read. You can merge all the states of the form $k,k,k-n$, for all $k \ge 1$, into a state $-,n$ from which $n$ occurrences of c must be read. In particular, there will be only two final states: one for the empty word, and one after reading the right number of c's. In this automaton, the $k$th side branch has $k$ edges to read the b's (so $k-1$ states, as the start state belongs to the a trunk, and the end state belongs to the c collector), and there are $z-1$ transitions to count the c's (so $z$ states, corresponding to $0$ through $z-1$ c's left).

In this particular case, it happens that the minimal DFA above is also a minimal NFA (if I didn't make a mistake). Here's an informal proof.

Consider the states in the middle of reading the b's. When reading $a^k b^i | b^{k-i} c^k$, where $|$ represents the current position, the state must account for both $k$ and $i$, to remember both the number of seen a's (which is necessary, because we'll need to count the c's later) and the number of seen b's (or, equivalently, the number of b's still required). This requires distinct states for every $(i,k)$ such that $1 \le i \lt k \le z-1$. In addition, there must be $z-1$ states to count the a's at the beginning, and $z-1$ states to count the c's at the beginning, plus a sink state. That's a total of $z(z+1)/2+1$ states.

I will give you an indication: first, write an automaton which recognizes exactly the language $M_n=\{b^nc^n\}$. How many states has this automaton?

EDIT: I removed the last part: you can use the pumping lemma to prove the minimum size for $M_n$ but not (at least not directly) for $L_z$.

Not the answer you're looking for? Browse other questions tagged formal-languages regular-languages automata finite-automata or ask your own question.

3
Is there a DFA with $k+2$ states which its reverse has $2^k$ states
5
DFA, lower bound on number of states, language with primes and remainders
5
Why is the number of states for DFA is 3n + 1 for this language
0
How to know maximum final states in a DFA?
2
Maximum number of states in NFA concluded from the converted DFA
3
How to handle dfa with countless states?
0
Showing that there exists an algorithm, that converts NFA to DFA under some cirumstances
0
No nonfinal states in NFA
1
Languages such that DFA requires $\Omega(c^k)$ states but NFA needs only $O(k)$ states?
0
Proof that $\{0|1\}^*0\{0|1\}^n$ requires at least $2^{n+1}$ states