What is “dynamic” about dynamic programming?

One of my seniors had a job interview and he was asked why it is called dynamic. He couldn't answer and after he gave up the interviewer said that there's nothing dynamic about it, its just called like that. That is hard for me to believe.

Does it refer to the fact that the subproblems are solved during run-time and used in reaching the final goal? Like dynamic memory allocation that happens during run-time?

I should have read this wiki article before asking the question, sorry.

I always intuited that it meant that algorithms using dynamic programming seemed to edit the problem space "dynamically" until the problem could be solved with a greedy algorithm.

For example, with the Checkerboard problem, the dynamic programming algorithm edits the entire board as it goes through it, and then finally, a greedy algorithm can be used (similarly, with Dijkstra's shortest-path algorithm, etc.).

I am unsure if this generalizes to every dynamic programming problem though.

Actually, there is nothing special in the name "dynamic programming"; the technique itself is just about smartly unwinding recursion. See this question and look at @Jeffe answer, in which is reported that Belman choose that name to be intentionally distracting.

There's an interesting story here.. Bellman pioneered this paradigm. But, this was actually mathematical research. Back in his day, the then secretary of defense was paranoid of the words Research and Math (crazy guy, right!). Bellman was scared that the secretart would be furious at his work and eventually would get him into trouble. So to blur things a bit, he called it Dynamic Programming, however there's nothing 'dynamic' about it..

Richard Bellman called it Dynamic Programming in the words in Bellman 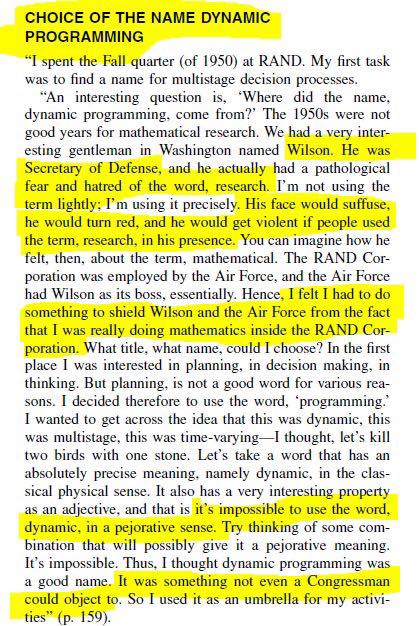 I spent the Fall quarter (of 1950) at RAND. My first task was to find a name for multistage decision processes.

An interesting question is, Where did the name, dynamic programming, come from? The 1950s were not good years for mathematical research. We had a very interesting gentleman in Washington named Wilson. He was Secretary of Defense, and he actually had a pathological fear and hatred of the word research. I'm not using the term lightly; I'm using it precisely. His face would suffuse, he would turn red, and he would get violent if people used the term research in his presence. You can imagine how he felt, then, about the term, mathematical. The RAND Corporation was employed by the Air Force, and the Air Force had Wilson as its boss, essentially. Hence, I felt I had to do something to shield Wilson and the Air Force from the fact that I was really doing mathematics inside the RAND Corporation. What title, what name, could I choose? In the first place I was interested in planning, in decision making, in thinking. But planning, is not a good word for various reasons. I decided therefore to use the word, "programming". I wanted to get across the idea that this was dynamic, this was multistage, this was time-varying. I thought, let's kill two birds with one stone. Let's take a word that has an absolutely precise meaning, namely dynamic, in the classical physical sense. It also has a very interesting property as an adjective, and that it's impossible to use the word dynamic in a pejorative sense. Try thinking of some combination that will possibly give it a pejorative meaning. It's impossible. Thus, I thought dynamic programming was a good name. It was something not even a Congressman could object to. So I used it as an umbrella for my activities.

Not the answer you're looking for? Browse other questions tagged terminology dynamic-programming or ask your own question.

0
What is the difference between dynamic programming and a mere caching?