Redundant States During Removal of Null-Moves (Regular Expression to DFA)

I've had this little doubt bothering me since four semesters now, so I've come here to resolve it. Theoretical CS was probably not the right place to ask.

Coming to the question, my old coursebook (Theory of Computer Science - Automata, Languages and Computation (Eastern Economy Edition) by KLP Mishra) details the conversion of the regular expression -:

to a finite automaton. The book details the process as follows: 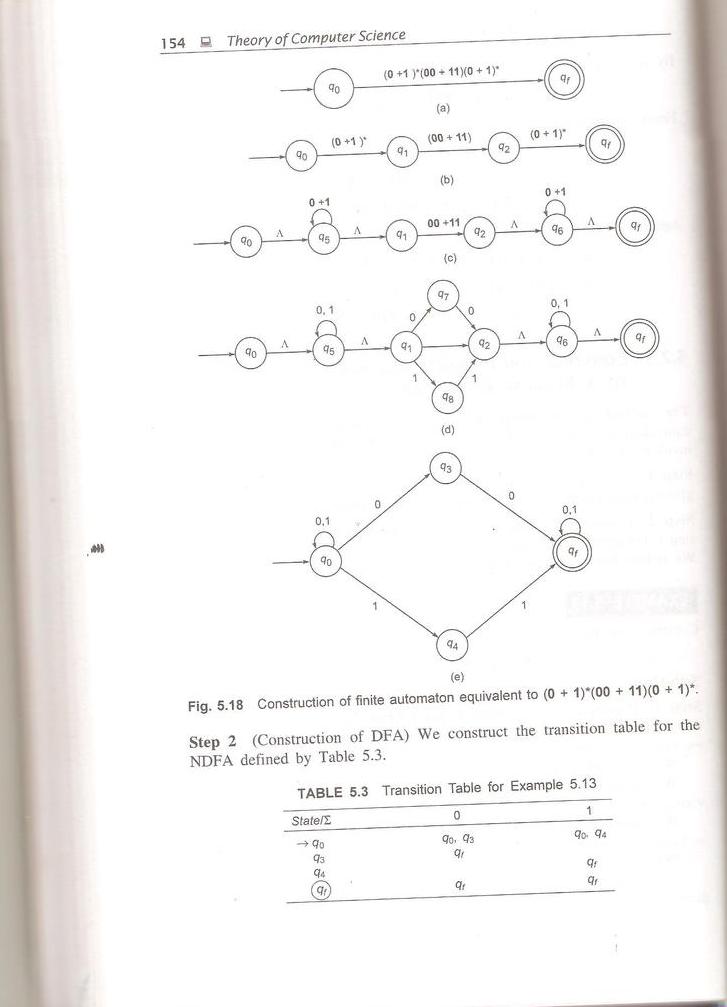 I am able to grasp the process uptil step (d). I do not understand how (e) was obtained, and there is no explanation given. I tried to convert (d) to (e) by removing null-moves, but I am not able to get (e) - I obtain a bunch of redundant states (extra initial and final states).

It is not possible to use the DFA minimization procedure to obtain (e) after the null-moves are deleted, simply because this isn't a DFA yet - it's still an NFA. Note that I've not shown the NFA to DFA conversion procedure, which was on the next page. Could someone point me in the right direction?

There are no steps given to obtain (e) from (d). That's what's confusing - I know I have to remove the null-moves but not how to get the neat and 'minimized' transition system given by (e).

[answer by UncleDolan originally embedded in the question post]

I believe I just solved the problem on trying it again. The strategy was to remove the nulls in the right sequence, not follow a random sequence of null-deletion. Following that, I had to remove unreachable and redundant states.

First, I state the algorithm used to remove null-moves as given in my coursebook.

For two vertices A and B with a null link from A to B,

Now I'll go step-wise through the solution. I generated the images using Graphviz on Ubuntu.

3
Are statecharts with parallel states NFA, DFA, or none of the above?
0
Getting minimum DFA for regular expression (11)*+(111)*
4
An NFA with no equivalent DFA with fewer than $2^n$ states: Example and Proof
3
An algorithm for comparing a DFA and a regular expression
1
Does exist an algorithm to find all equivalence classes of given regular expression without kleene star? If yes then what is it?
1
Whether equivalence of different types of automata is of P-type?
1
How do NFA's make program design any better when converted DFA form can't remember original states?
3
Is there an NFA whose corresponding DFA has lesser number of states than the given NFA? (without unreachable states or epsilon moves)
5
Efficiently convert an NFA with multiple $\varepsilon$ edges and accepting states into a regular expression