This problem is from the book [1]. In case of being closed as a duplication of that in [2], I first make a defense:

My partial trial is by contradiction:

I failed to continue...

algorithms graphs spanning-trees
Share
Improve this question
edited May 23 '17 at 12:37

If we construct a spanning tree for $H$ containing $T_G \cap H$ then your approach leads to a trivial contradiction (meaning that your initial assumption is automatically contradicted by any direct proof). Here is the construction of a MST for $H$ from a MST for $G$:

Consider the figures for an example: 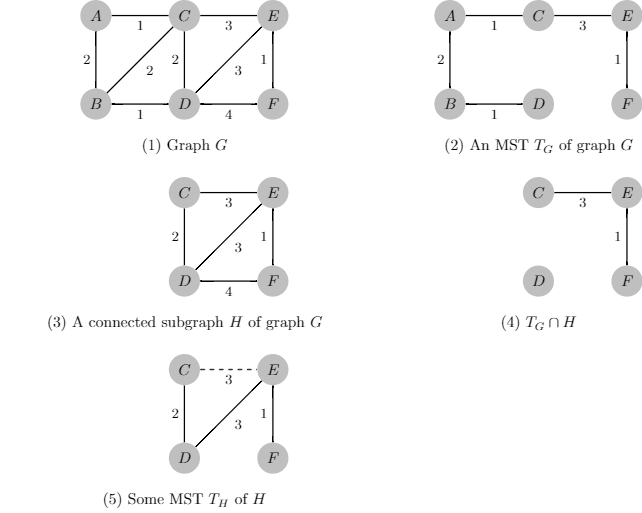 Note: In the following, I fix the flaws. I leave the answer given by @Mahmoud A. as accepted because it is original and insightful.

In fact, $F$ has to be a sub-tree of $T$, since $C\setminus e$ is connected, and the trees of $F$ covering the endpoints of pairs of edges incident on a common vertex must be the same.

Now we are at a contradiction: both endpoints of $e$ are in a subtree of $T$ not containing $e$. This is impossible if $T$ is actually a tree.

For the non-unique weights case, just pick an order of the edges consistent with the weights and then perturb them to reduce to the distinct case.

Not the answer you're looking for? Browse other questions tagged algorithms graphs spanning-trees or ask your own question.